We Got a Dairy Cow! 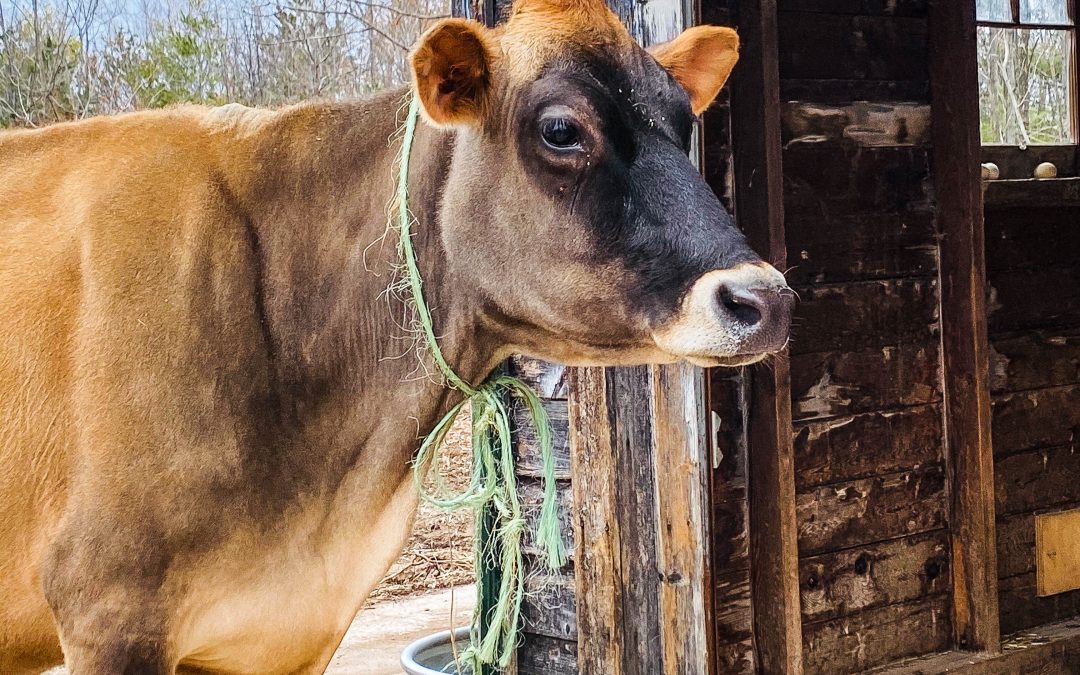 It’s Monday. We have record high temps here in Door County, a well pump that hates us (IE: no running water), brakes on the truck that are not cooporating with Joel’s mechanic skills and I’ve hit my wall after going non-stop since February 28th in the garden.

“Not I,” said the cat! Even as I sit here with a total sweat mustache. In fact, the Fourth of July weekend has come and gone, and I’m STILL celebrating the purchase of our first dairy cow all those weeks ago. Yep, right before the Fourth we were blessed with the birth of the most precious little bull calf and I’m still flying high.

Having a cow is the farmy icing on the cake. Getting this gal was the fruition of a dream about ten years in the making. That’s about when I got the itch for my own farm, the itch for more space to grow vegetables, and it’s also when I got my first “illegal” chickens and hid them in a coop build in my garage. (You can read about our Half-Way Farm adventures in these blog posts here.)

And of course, From France to the Farm was written there as well:)

That itch became so strong we moved out of the country burbs and rented a small, shabby little farm and it’s there that we learned to homestead. Half-Way Farm. Half-way to our dream of a farm in Door County. It was there that we dabbled in raising pigs, milk goats, ducks, chickens, rabbits, bees and more… all with the ultimate goal of having a cow someday.

Fast-forward a cookbook, a ton of blog posts, the launch of a Youtube channel and our big move to Wisconsin… fast-forward to me reaching out on a dairy cow group on Facebook –

“Wanted: A gentle, pregnant jersey cow. A seasoned pro who would be the perfect first cow for a family of 8.”

And before I knew it, a trailer was pulling down my driveway. My heart was pounding. Truth be told, I’m “not an animal person”. I have a very pragmatic view of animals. (Don’t hate me.) They deserve a good life and respect, but I need them to serve a purpose. It’s very easy for a homesteader to get carried away with “all the things” and suddenly, all you do is work for your farm instead of it working for you.

Thunderous hooves were pounding in that trailer. I could see hints of an animal through the metal slats. She was stressed to be sure. The poor thing. Culled from her pasture where she was part of a herd of 70, her milk, used for an artisan cheese company here in Wisconsin.

But now, she was MINE!

She came unsure, but obedient into our barn. I can’t say the same for our ram, Shawn, in the enclosure next door! He got SO spooked, he jumped the fence and made a run for it! He’s an ornery S.O.B. and we keep him away from the children and only handle him through the fence. I hollered for all the kids to jump up into the cottage for safety as Joel and Aidan tried to corral him into the next pasture. Five little faces peeking out of those old glass windows. In all the chaos he violently knocked Joel to the ground twice and so Shawn will be going to that great freezer in the sky. An unfriendly ram is a dangerous animal to be sure.

Here we are, trying to look all chill and knowing to this farmer that has delivered our cow and we’ve got a physcho and totally spooked ram on the loose. It was scary and hysterical.

Fern warmed up to us within minutes and we were SMITTEN. Now began that countdown to her calving, due the end of June. Daily treats and use of her name (she never really had a name before, so we gave her that dignity) and she seems to love us as much as we love her.

The morning of the calving was misty, romantic and a memory to be sure. Her ligaments went soft the night before so I woke the girls up early and we grabbed our lawn chairs so discretely watch from a distance. She was mooing low and gently in her stall and we could tell something was up…

To see what happened and how we are celebrating Fern and the arrival of Young Sir enjoy this video right here!