They Royal Wedding Recap Part I: Who THEY Were Wearing! 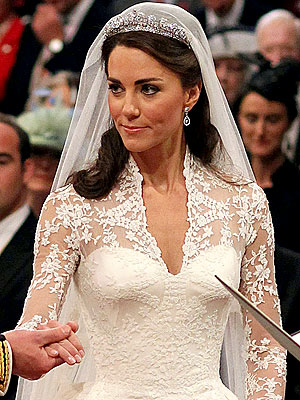 I don’t know what you had imagined…
but I had to hold back an “I knew it!” when I saw that dress!  I mean, how could she have chosen anything other… it was… perfection!
Dang, that girl is a DOLL!
Here is what the BBC had to say…
The dress details a rose, thistle, daffodil and shamrock to represent each nation of the UK  – (Ang here, you  have to to love that, that is the kind of detail Diana used to put into her clothing… honoring her own country and the countries she would visit…)
Continue reading the main story

After weeks of speculation Kate Middleton’s very British wedding dress has been revealed. 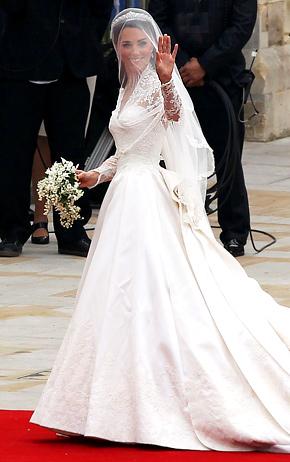 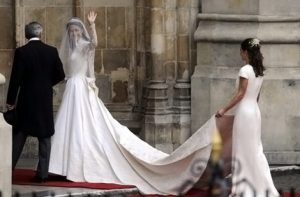 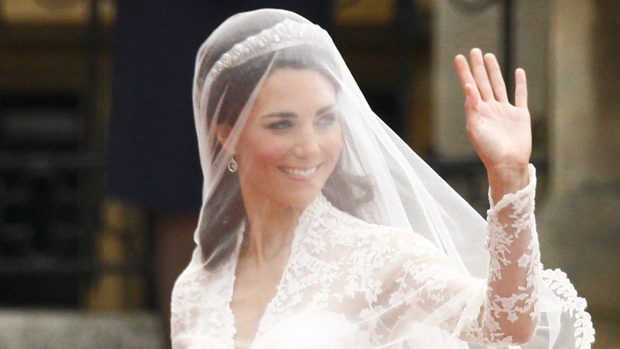 Designed by Sarah Burton of Alexander McQueen, it has a lace appliqué bodice and skirt, and veil. The bride wore her hair down, with a tiara.
Ms Burton said creating the royal wedding dress had been the “experience of a lifetime”.
Prince William wore the uniform of colonel of the Irish Guards, as well as his Royal Air Force wings.
The lace on the bride’s dress details a rose, thistle, daffodil and shamrock, and was hand-made by the Royal School of Needlework at Hampton Court Palace.
The bridal train measures 2m 70cm, and along with the lace, all other fabrics used in the creation of the dress were sourced from and supplied by British companies.
Continue reading the main story

The lace motifs were pinned, “framed up” and applied with stab stitching every 2mm to 3mm around each lace motif.
Workers washed their hands every 30 minutes to keep the lace and threads pristine, and the needles were renewed every three hours, to keep them sharp and clean.
The veil was held in place by a Cartier “halo” tiara, lent to Miss Middleton by the Queen.

The bride’s earrings were a wedding day gift from her parents, Carole and Michael Middleton.
The earrings were the bride’s “something new”. For her “something blue”, a blue ribbon was sewn into the interior of her dress, while her “something old” was the traditional Carrickmacross craftsmanship used to create the bridal gown.
Made by Cartier in 1936, the tiara was purchased by the Queen’s father, the Duke of York (later King George VI) for his Duchess (later Queen Elizabeth and the Queen Mother) three weeks before he succeeded his brother as King. 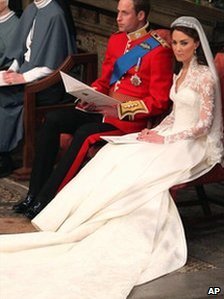 The designer said she enjoyed every moment of making the royal gown
The tiara was presented to Princess Elizabeth (now the Queen) by her mother on her 18th birthday.
The bride’s bouquet was a shield-shaped wired bouquet of myrtle, lily-of-the-valley, sweet William and hyacinth. It was designed by Shane Connolly.
Maid of Honour Philippa Middleton’s dress was also designed and created by Sarah Burton at Alexander McQueen.
A heavy, ivory satin-based crepe, it had a a cowl front with the same button detail and lace trims as the bride’s dress.
The four young bridesmaids’ dresses were designed by childrenswear designer Nicki Macfarlane and hand-made by Ms Macfarlane and her daughter Charlotte Macfarlane at their homes in Wiltshire and Kent.

The mother-of-the bride Carole Middleton wore a sky blue silk dress with short pleated sleeves and pleated pockets by Catherine Walker – a favourite designer of Princess Diana.
Over that Mrs Middleton had a sky-blue wool crepe coatdress. Her hat was by Berkshire-based Jane Corbett.
For more on this article visit: HERE!