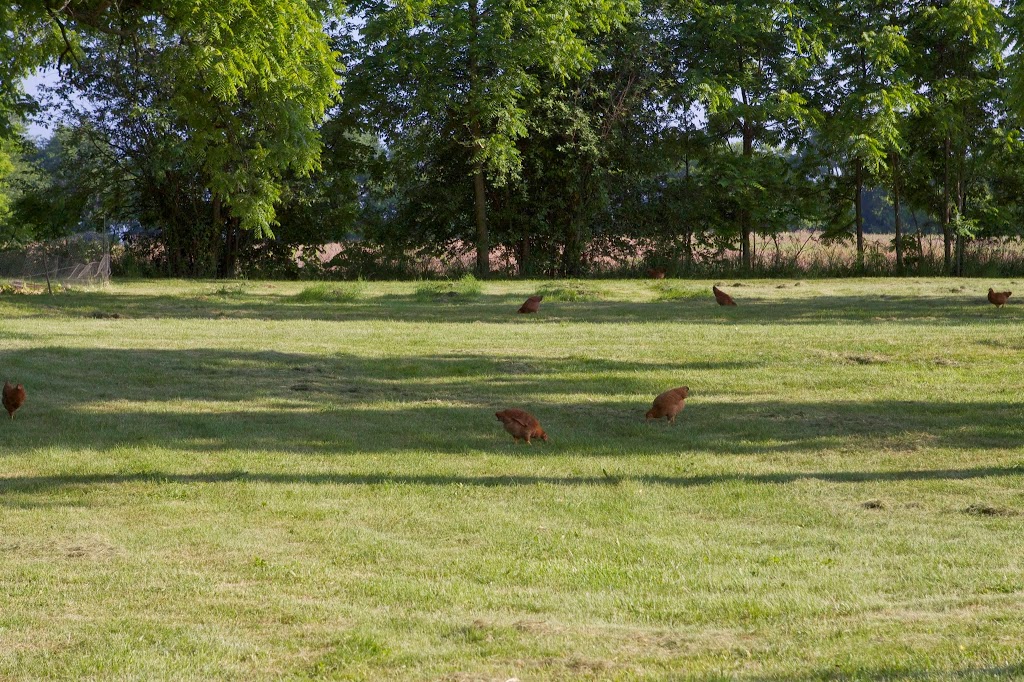 VEGANS, PETA PEOPLE – this post is not for you.  🙂

The numbers are in.

The basement is full of herbs, apples and some quarts.
The “homestead fridge” is full of potatoes, squash and seeds.
The freezer full of chickens.
Whew.
I wish there was a vacation on the horizon.
I am so excited to share this with you and even more excited about next year.
Let’s talk turkey chickens.
In April $87 worth of Red Ranger chicks arrived at our local post office.   We were just getting over a near-death experience from the flu.  And of course, I was pregnant.  Ugh.
I chose Freedom Rangers for a few reasons – they are “french” (mais bien sur) and I had not heard impressive things about the Cornish Cross.  I wasn’t in the mood to deal with birds who were sickly from growing too fat too fast.   Rangers take a bit longer to grow than a Cornish Cross but they are known for being great free-rangers and I wanted to save money on feed.
We kept the chicks in the barn with a heat lamp and feed.  We got 36 and I had to kill one right off the bat because she was born with no eyes and would not eat.  That was my first “killing” – ever.
As they grew bigger we moved them into the garden barn and penned them in with one of those toddler octagons.  On warm days we would bring them outside to “teach” them to free-range. 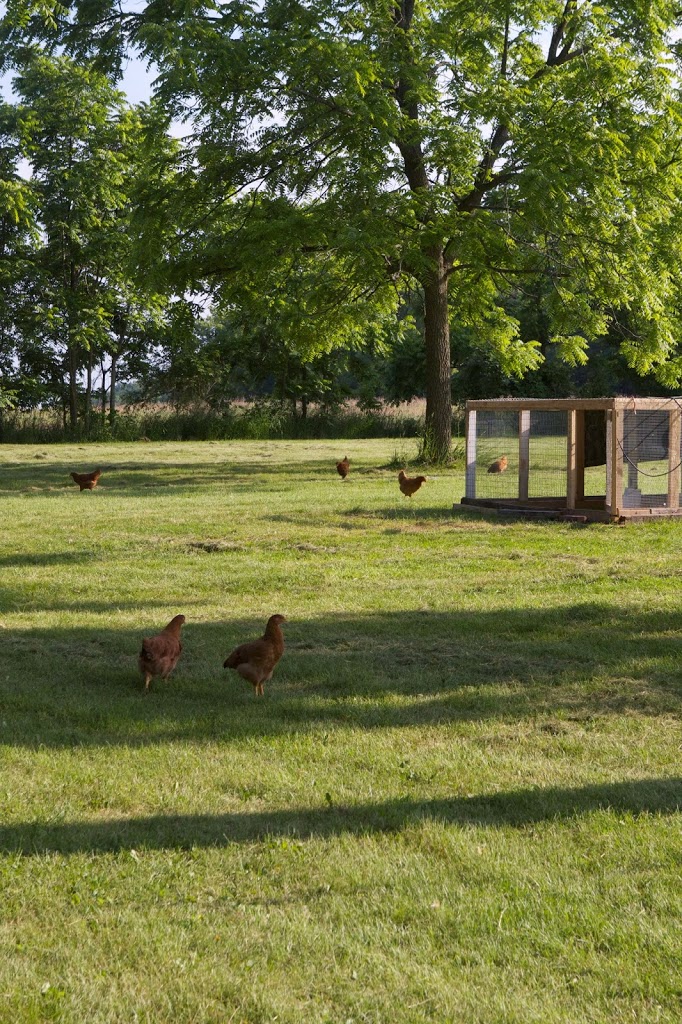 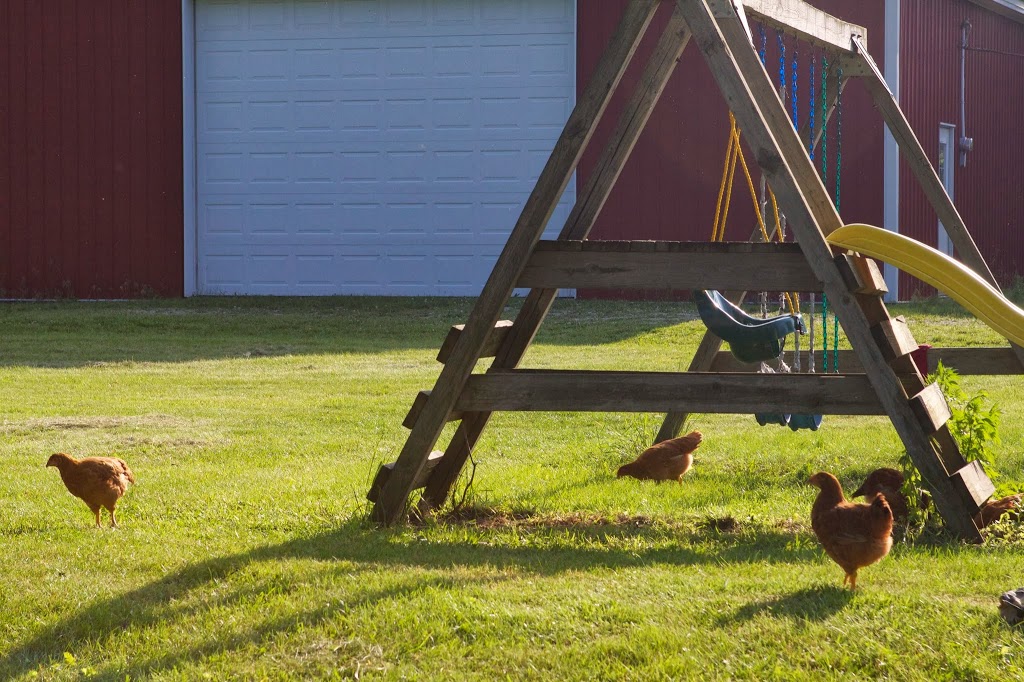 Finally they became too big for the octagon and we built a chicken tractor (of sorts).  Joel works so much that everything we do has to be done FAST and I had been researching PVC pipe chicken tractors but there were to many details to convey to him during a driveway meeting so we settled on using the two by fours we had, chicken wire and a tarp.
The point of a chicken tractor is to move it around your lawn after the chickens have had their way with a particular patch of grass.  You are supposed to build them light enough that the wife and kids can move them – ahem.  Ours is a bohemith.  We have to pull it with our Suburban with straps and a furniture dolly under one side.  I have no idea how other people keep night time predators out of their chicken tractors.  We lost a few birds to having their FEET chewed off and then being left for dead.  This was due to small gaps from uneven yard so Joel jerry-rigged barriers with extra two-by-fours.  It was a PAIN IN THE BUTT and he had to spend A LOT of time re-doing them every time we would move the tractor which we got more and more lazy about.  It took TOO MUCH time.  We will have to re-think some things next year.
Finally at nine weeks we watched as many You-Tube videos as we could stomach, rented our equipment, sharpened our knives and prepared for the worst best.  I was eight months pregnant, the weather had been unseasonably cool but of course, that day it was ninety degrees.

Here’s me the day of screwing around with the self cam for Facebook. 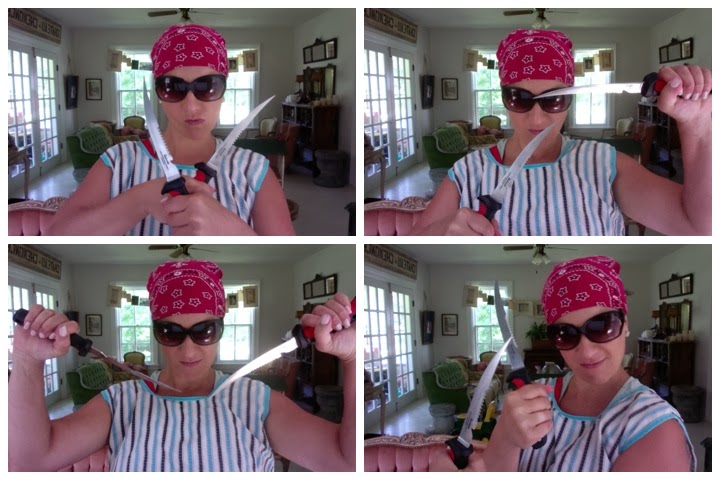 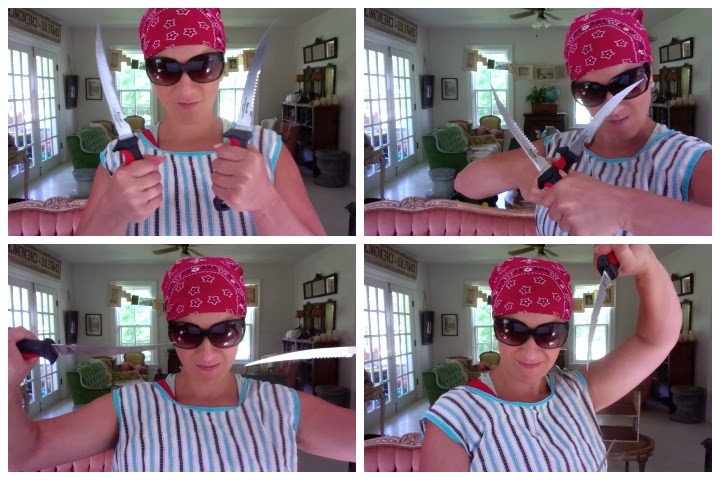 The water heater we rented would not work so we opted to build a fire over the fire pit, put down a grate and  got the water to the proper temp.

We set up a flea market tent and hung our first four birds with slip knots and went for it.  With four little helpers mind you.  It was NOT fun.  It smells.  Blood was spraying everywhere when those birds would flap around as they hung from the tent and then the bad news.  As the feathers came off the first birds we both let out a disappointing, “Oh Sh–.”  It was the most anorexic, pathetic looking bird you have ever seen.  But we were already into it and had to keep going. 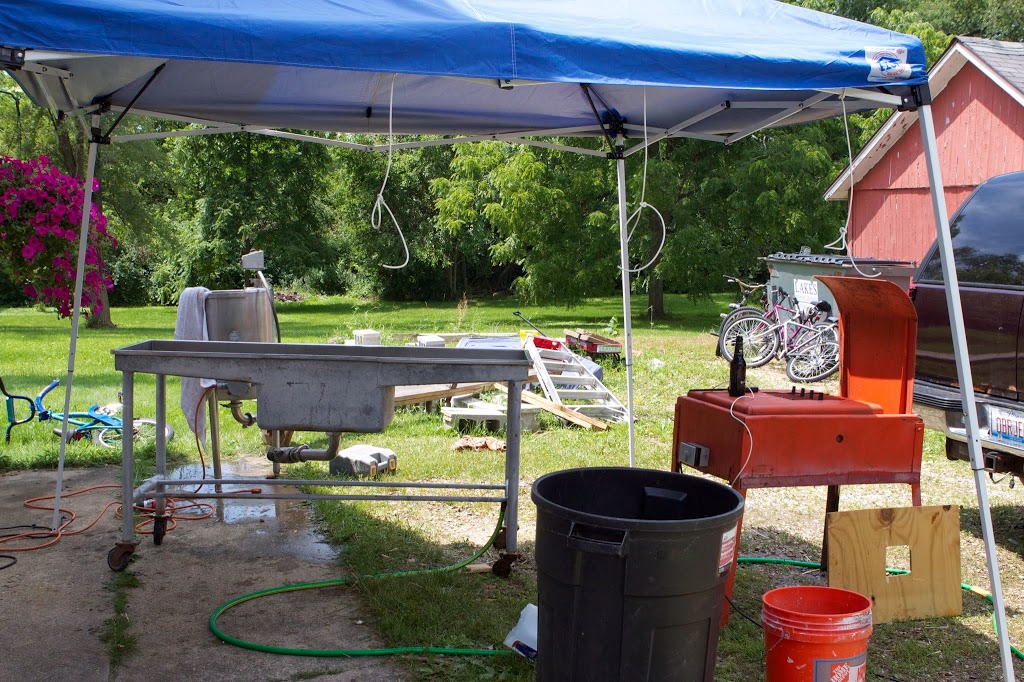 Oh my gosh – does this look like a hillbilly set up or what???  Look at all that crap in the background!!!  I put my foot down a couple weeks ago and hid all that crap behind the other barn!!! 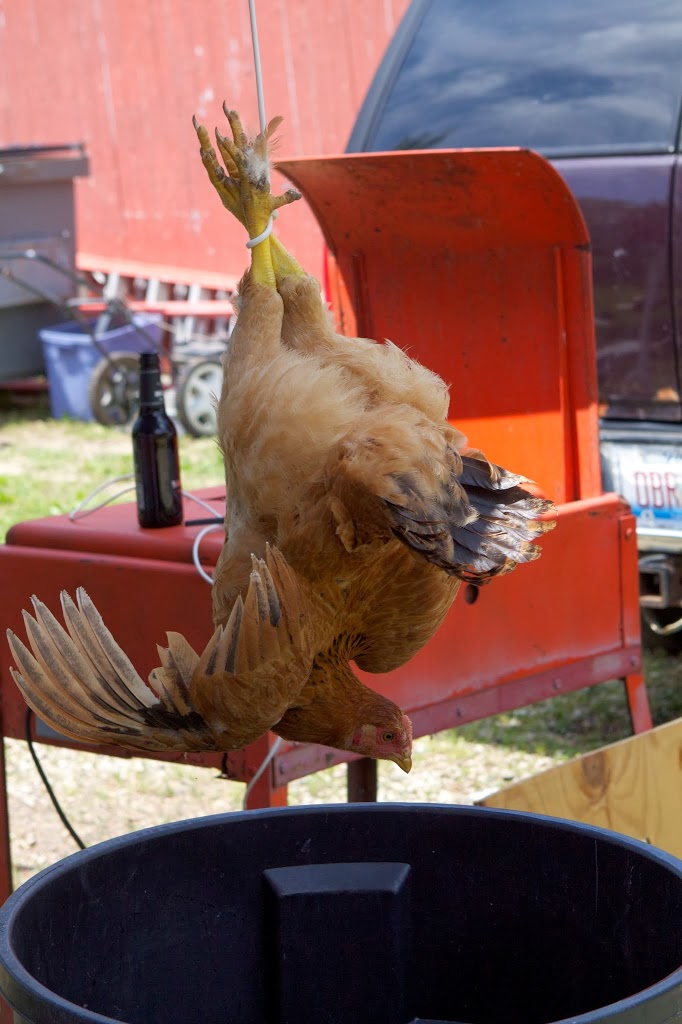 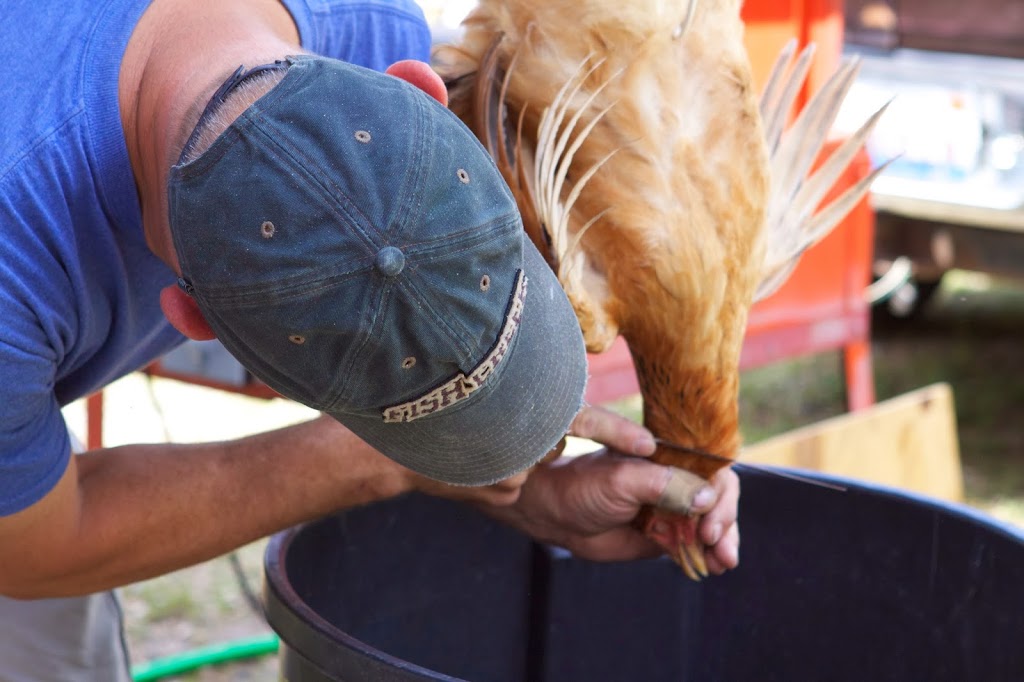 We did 13 birds in four hours.
Just embarassing.
Joel killed.
I gutted.
On the final bird I suddenly barfed everywhere and Joel said I was done and to go jump in the pool.
My hero husband then put his foot down and said he was paying to have the rest done.  Our schedule was full for the next few weeks putting the next chance we could do it at nine months pregnant.   I threw a fit.  For $4.25 a bird to process I felt like that was sabotaging the whole point.  “But not because you don’t think I can do it right?”  I whined.  “No Ang, because I know you CAN.”
We feed those last 17 birds as much feed as we could muster for another two weeks and kept them penned up.  Upon visiting with the processor he said they were very impressive birds and they liked the amount of dark meat.  He also said he appreciated our goals to free-range our birds but they they were so skinny because they “burned off” everything while they were out running around all day.  He showed us a Cornish Cross he had just done and it was HUGE compared to our paltry 3.5 pound birds.

About $21 a bird which may sound horrible but around here the organic chicken CSA’s are $20 a bird – true they are probably bigger than our little things but whatever.  It’s our first year and I am a bit, but but not entirely disappointed.  And really, for me as  Momma who lives 45 minutes from the grocery store you can’t put a price on pulling dinner out of the freezer when it’s needed.  That’s sanity… and it’s priceless.  Not to mention our children learned to care for baby animals, they learned about predators, death, responsibility and delicious, home-grown food.  Lord knows it wasn’t me taking care of those birds.  We named them the Angry Birds but Hoolie’s hysterical Boston accented “Meet Beerds” took over and I think we will always say it that way.

What will we do different next year?

We will TRY Cornish Cross.  It seems that we need to try them in order to really make an educated decision on what’s best for our farm.   I do look forward to the fact that we won’t have to keep them around as long.  A local farmer told us to supplement them with calcium and we won’t have any problems with their legs.   They will go in the chicken tractor but we will not let them free range.
Will we process them ourselves?  The jury is still out.  I think we should – Joel isn’t that interested.
I would like to do more – at least 60 total throughout the year.  Next year with quicker growing birds and the expense of the chicken tractor out of the way I expect a much better R.O.I.

There is something pretty empowering about raising your own meat.  I could really get used to it.