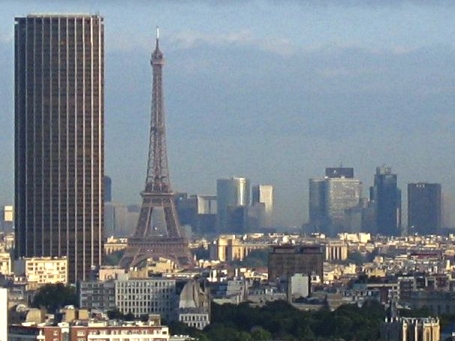 I am a sucker for settees.
This house has four… and counting.
I think that if you are going for a Parisienne Farmhouse kind of look you just about have to have a settee.  There are few pieces that look as cool when paired with rustic, farmy accents and settees have that authentic “Paris Apartment” look that few other pieces of furniture can give a Francophile.

I’ve only been in a handful of Parisian flats.  Most seem to be decked out in a truly European combo of antiques-meets Ikea-meets flea market.  You’ll often see the influences of the French colonies too like a bit of Morocan flair.  I was lucky enough to be invited for lunch to the home of a rather affluent Parisienne once.  Right on the Blvd. St. Germain.  This building was the real deal.  Red carpeting, an old iron clad lift, large spiraling staircase.
I was giddy.  And rather nervous to meet this friend of a friend.
She of course like a true Parisienne entertained me with lively conversation, graciously assisting me with my French when needed.  I calmly tried to eat only as much as she was even lest I look like a hog though she had made my favorite salad (endive with walnuts and blue cheese).  Everytime she left the room I tried to take in all that I could from the GORGEOUS elaborate plaster moldings that trimmed the ceiling to the ancient painting of a family member placed above the buffet and of course the settee.  It was all I could do not to stand on the table, rip the chandelier out of the ceiling and run for la Butte!*  Showing restraint I found myself instead fascinated by this lovely, interesting woman who in the last year had learned how to bind old books and reupholster antique chairs.
Yes, she was that cool.

After lunch we walked to the Jardin du Luxembourg and I hung on for dear life as she prattled away as only the French can do.  Finally a particular word lost me and I had to interrupt. She had been ranting about the hideous Montparnasse tower and had lost me with this word I had never heard.  Today, years later I don’t remember the word (It was a word that meant something like “grievous error”) but I do remember the way she defined it by equating the Tour Montparnasse to Martin Luther and his 95 Theses.   She had been such splendid hostess that I did not have the heart to tell her that I was rather intrigued with Luther.  She was after all, the first person of Faith I had met in the city which seems to be rather Faithless so I kept my mouth shut not caring about small or even large theological differences.  We continued our walk to the garden, stopped for an Orangina, found two chairs along the pond talked a bit longer and then went our separate ways.
What does that have to with settee’s?  Nothing much.  But it’s a fond Parisian memory for me.

If you wait patiently you will find the perfect settee but you might need to be ready to paint or whip up a slip cover.  Plan to spend anywhere from nothing to $1500 or so depending on the level of your patience and your resourcefulness.
Here are mine, where I found them, what I did to them and how much I paid… 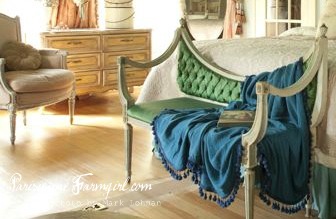 This one lives at the edge of my bed.  It is covered in green silk but the wood was icky, speckled 1970’s so I painted it.  It desperately needs to be recovered.  That blue throw covers a whole mess of duct tape.  For real.  I paid $90.00 for this lovely around the corner at a re-sale shop.  I have never seen anything like it and hope to be able to afford to have it reupholstered some day.  It features a Louis VXI leg which is my favorite. 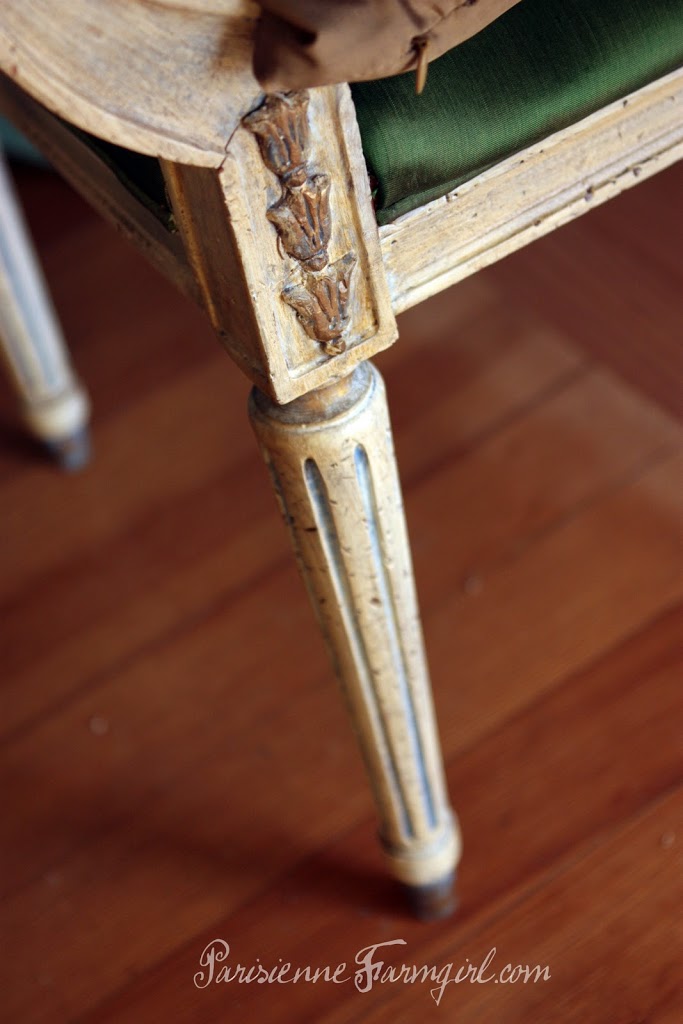 This one is green too… 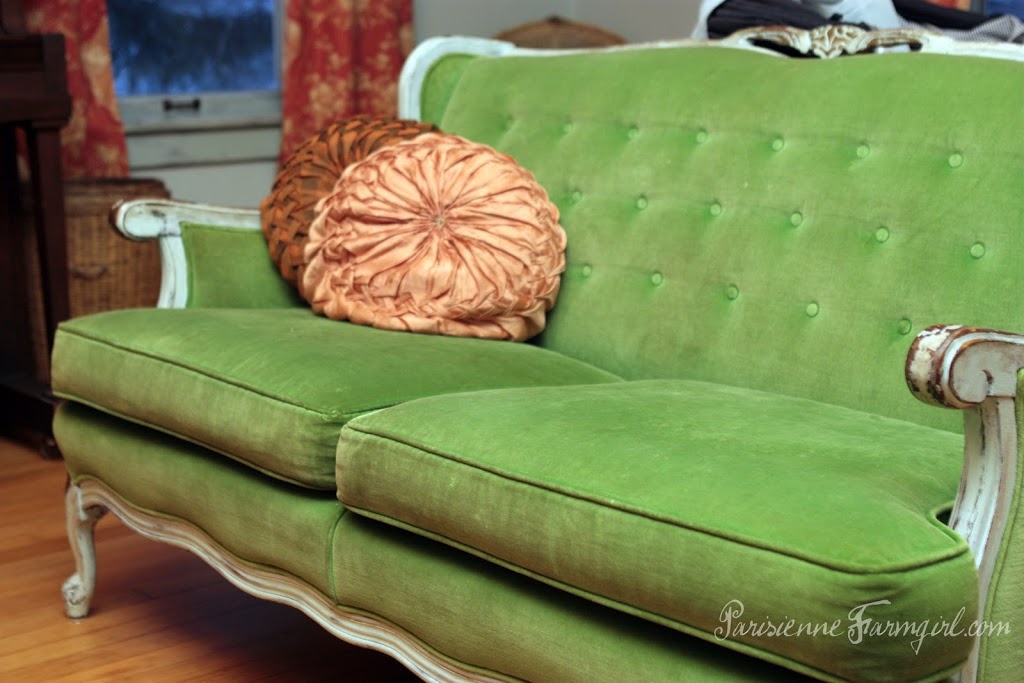 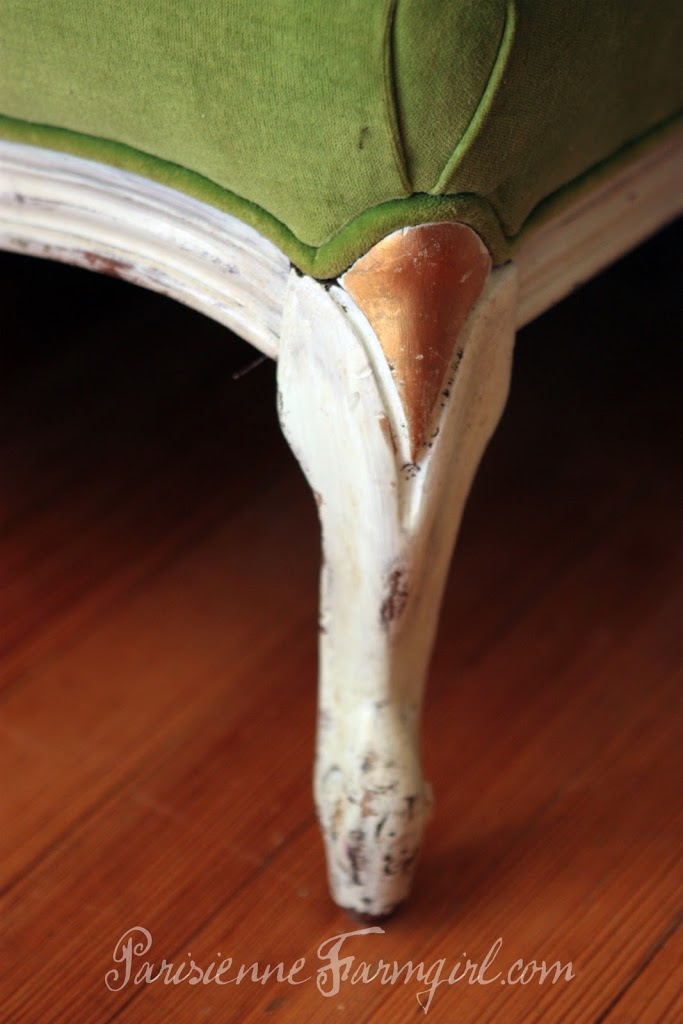 I am admittedly horrible with fabrics.  I believe this is green velour and it has seen everything from almost black nail polish to a dark chocolate disaster one New Years Eve.  I paid $250.00 for it at an “Antiques in the Park” day across the street from the house.  It too was 70’s and speckled so I painted it gaining inspiration from Annie of Eurotrash fame’s sofa.  It really needs to be repainted.  It’s been about eight years.  I’ll cry when the material finally gives out.  I just love it.
And now the garbage pick… 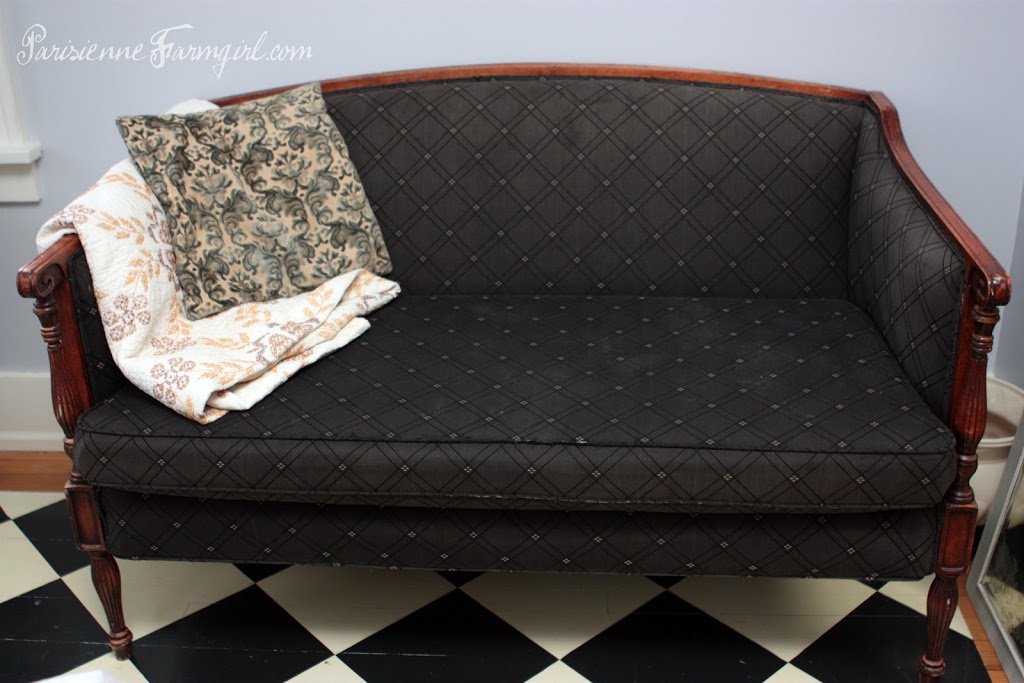 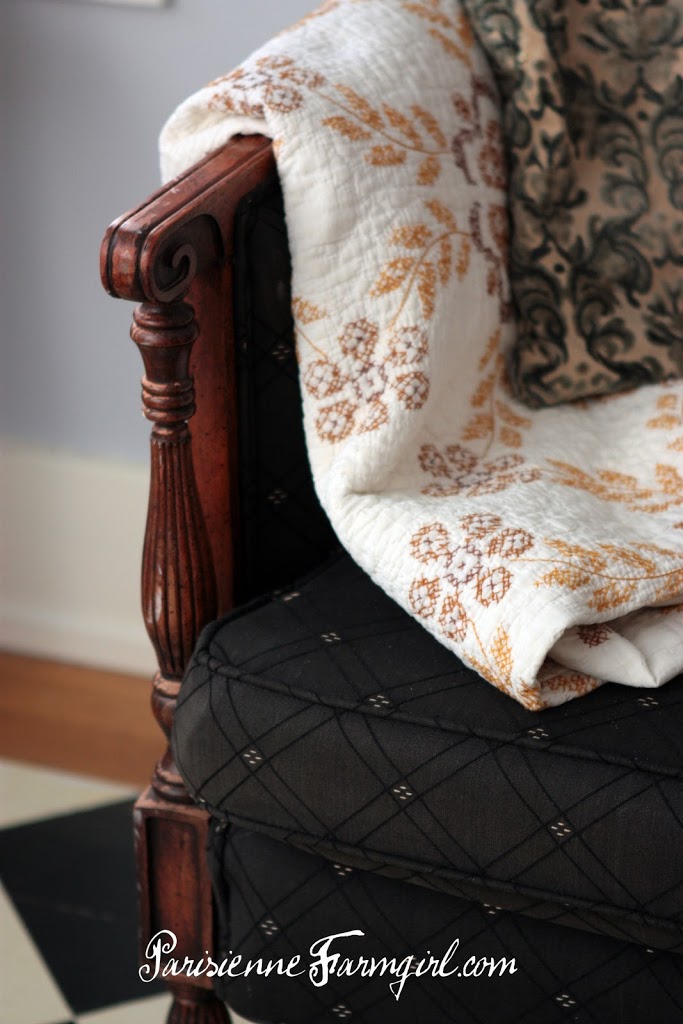 Well sort of.  Let me see if I get this straight…  I think my Mom bought it from a dealer friend who had garbage picked it and then charged Mom $80 for it.  Then Mom got sick of it and I adopted it as my own.  I am assuming I paid Mom for it, but maybe I owed her money for something and we wrapped it up with this sofa.  Nonetheless – look at those legs.  Once again it’s that 1970’s French Revival looking speckled wood.  This settee made books and magazines last year but now that it has a new home in my sun room it’s getting a paint makeover ASAP.  Oh, and I can’t WAIT to show you the rest of the room.

And now, the piece de resistance… 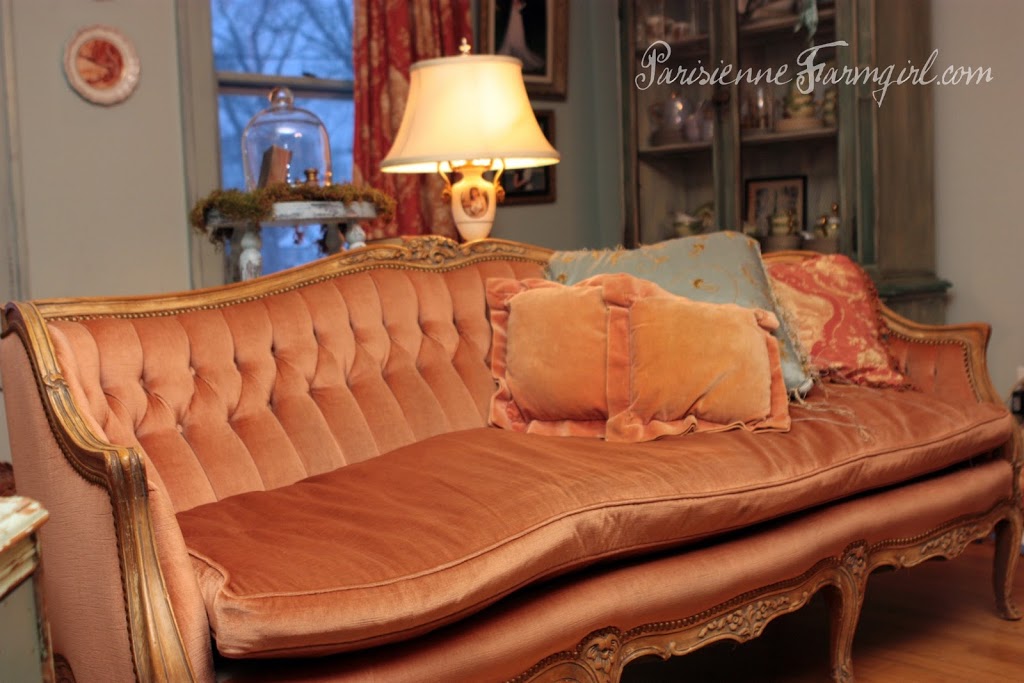 Craigslist baby.
$175.00
That’s right.  $175.00.
Peachy, paprika velvet.  Down filled.  From an antique store in San Fransisco.  We went to pick it up a couple years ago – the day Chicagoland flooded.  We arrived at the lady’s house on the swanky North Shore a half hour before she did.  It was a total deluge.  She called us, told us how to get in so we went in and waited.  Glancing down her open basement stairs we could see her basement was flooding.  She got home just then and we proceeded to help her frantically save all her family photos which were on the basement floor.  …Opening boxes of them and spreading them all over her house to dry.  It was so weird and so sad.  Then we wrapped our new sofa in YARDS of plastic drops cloths that we had brought with us, duct taped them and loaded the kids in the truck praying the whole way home (one hour) as we drove thru the streets-turned-rivers that our sofa would make it OK.

Now since I have never slip covered my own (yet) I wanted to show you this charming little number I found over at my new friends “Dear Lillie” – this is your typical, ugly, thrift shop settee and I was just so impressed with this simple makeover I had to show you!  (Promise me you won’t get lost on their blog and never come back to mine!  It is SOOOOOOO wonderful!) 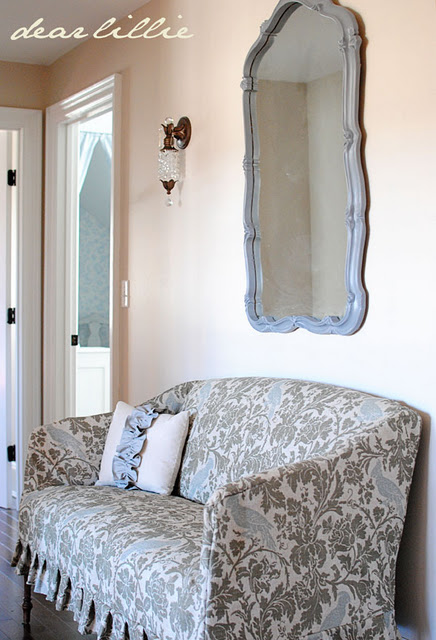 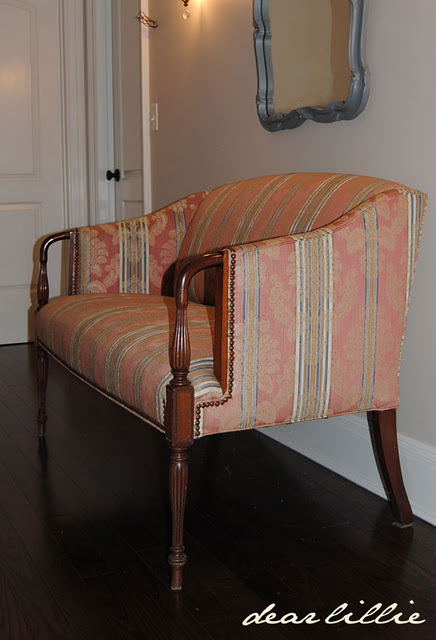 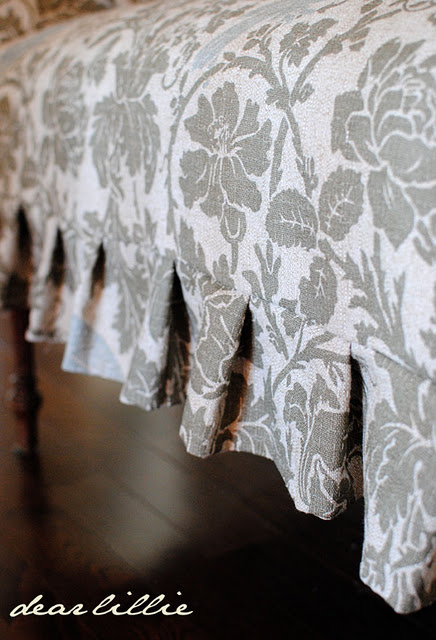 And, now, if you find yourself licking your chops for a settee of your own I want to show you how easily you can find one.  Below I have five settees/sofas from major cities across the country.  Click the link to see the actual Craigslist page. 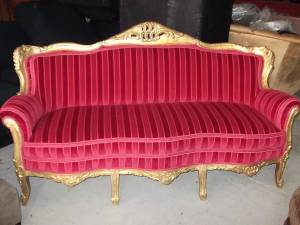 http://detroit.craigslist.org/mcb/fud/2813585441.html
No price listed and yes, it’s more of a SOFA – but you should SEE what else this store carries! 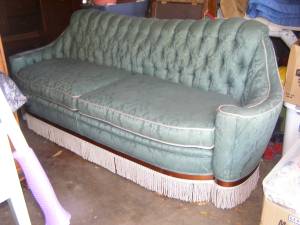 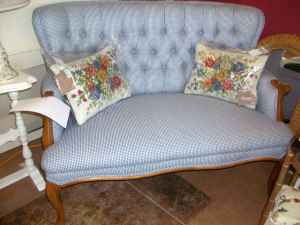 Hope you enjoyed~!
Oh, and “la Butte” – well if you got that then you are marveling at how funny I am!  HAHAHA!
If you didn’t, you’re not alone I am sure of it… that was my lame attempt at humor and to say “run for the hills” as I was referring to la Butte de Montemartre – Paris’ little city on the hill. 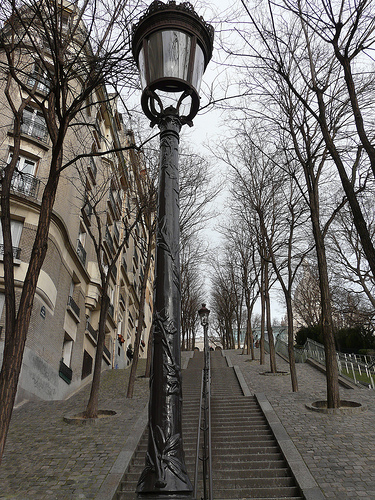 All photos not labeled as mine:  Google Images.
Music played during original post:
Compainte de la Butte from Moulin Rouge