Saying Goodbye to my Potager… The Beginning 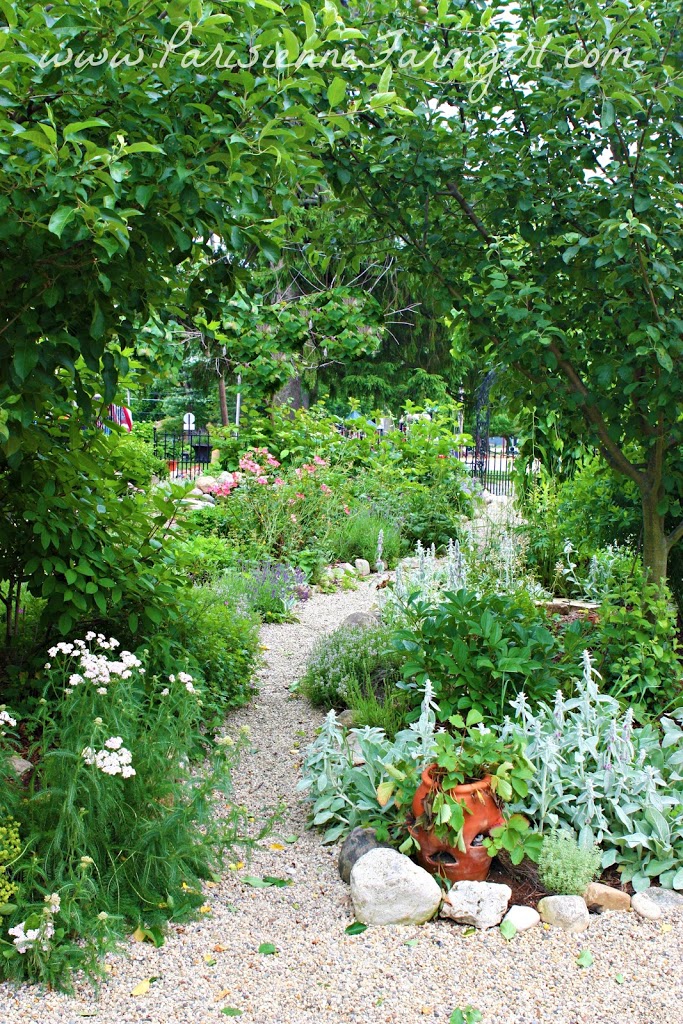 I am in a strange chapter.
The house is on the market…
it’s like we are giving it away.
But that’s O.K.
It’s for the best.
Who knows what is going to happen with our country, we don’t, but we are willing to make some drastic changes
to come out on top in a couple years.
In the meantime there is my potager.
Carved out with my own blood, sweat and tears.
I am very discouraged.
With the heat it’s been so hard to keep in tip-top shape – (in many ways I have given up on the front gardens.)  Emotionally, it’s so bizarre.  I am trying to really disconnect from it.
It’s going to be the nicest garden I have for some years,
but I have to begin to let it go (in my heart).  This house may sell tomorrow, it may sell next year, but I have to get ready for it not being “my potager” any more.
I won’t be doing a drive by for at least a decade.
I love my Potager, but I must confess, this year it’s not the same.  My heart swells out there… but just a little.
The disconnecting has surely begun and it’s very sad.
I just keep telling myself about our plan…
-sell
-rent and live way below the radar as we save and save
-buy that farm when the market drops out in a couple years
-design a bigger, better potager and live happily ever after 🙂
Help me with this will you?
It’s mid-July.
Let’s say by late September the house has not sold… What do I do?
See, I want to take a bunch of stuff with us.  A handful of roses and other perennials that I can easily divide.
So, what if it sells when the ground is frozen
and I can’t get at what I want?
Could I buy rubbermaid bins and “plant” these things in my garage for the winter?
Should I?
It’s such a gamble!
What if it hasn’t sold by spring… then do I throw everything back in the ground… and dig it up when/if it sells next summer?
Ahhh!
I can’t stand it!
In the meantime… I still walk my garden… but not as much.
With this slight break in the heat I have committed to myself to really get out there and savor it with the kids but I can’t love it like I used to… I can’t make plans for it as I fall asleep at night…
It’s just too sad and I have to let it go.

My apple trees that I planted when they were sprigs… Now tied together making a lovely arch at the end of this path.  I have a chair under one and I sit in the shade and watch the kids in their tree fort. 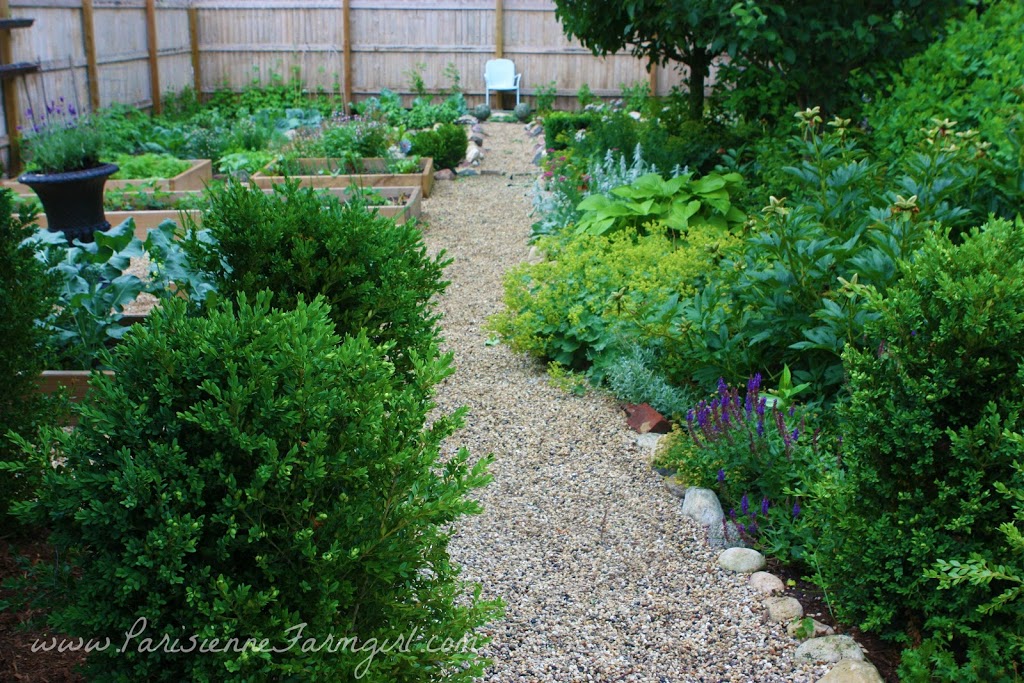 The big addition looking into the original potager.
I “heart” pea gravel. 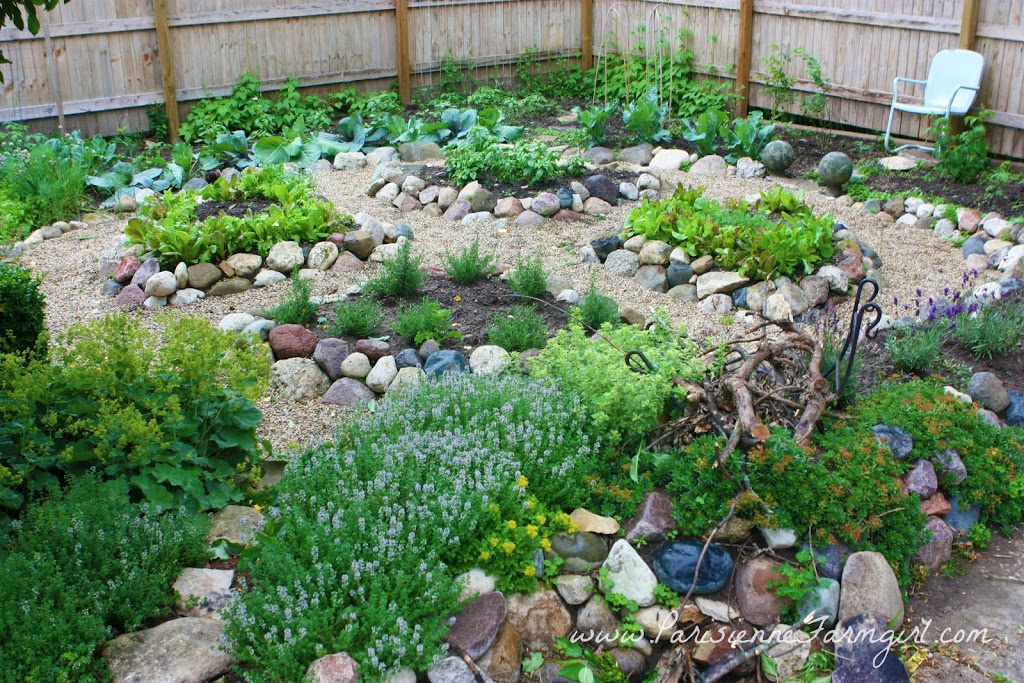 My original design.  Little steps going down off our terrace to the potager.
You can see it from Google Maps 🙂 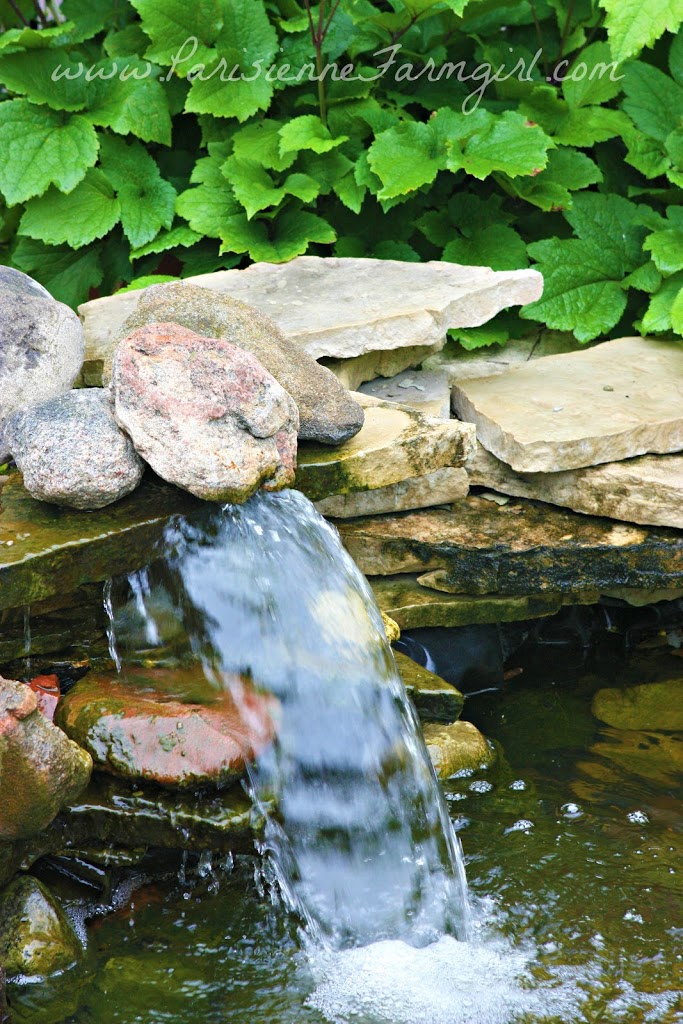 My pond.
We re-did it this year.
I’ll have to show you someday…
My mulberry tree (the kids second tree fort) now touches the edge of the pond… I have carved out the branches so they make a tunnel down a portion of the path.
I am going to put Christmas lights in there like I did last  year. 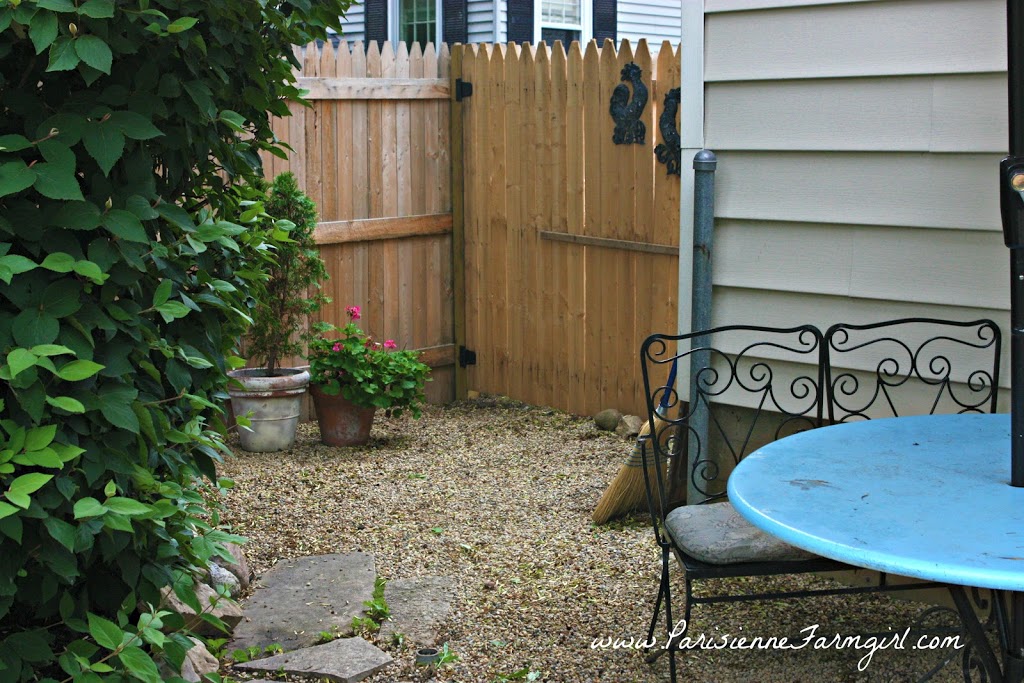 The entrance to the former Chicken Run.  You can thank me saying goodbye to My Ladies to the people in the gray house!!! 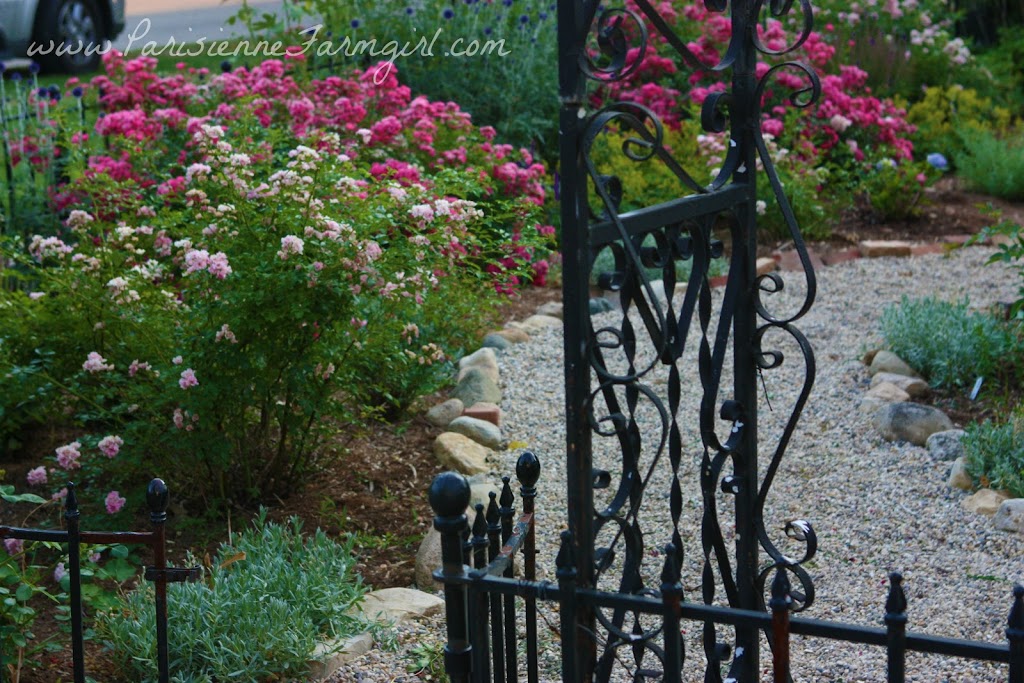 My four fairy roses – one for each child – That I am going to dig up even if they scratch me to death.
Our arbor that we got married under 17 years ago. 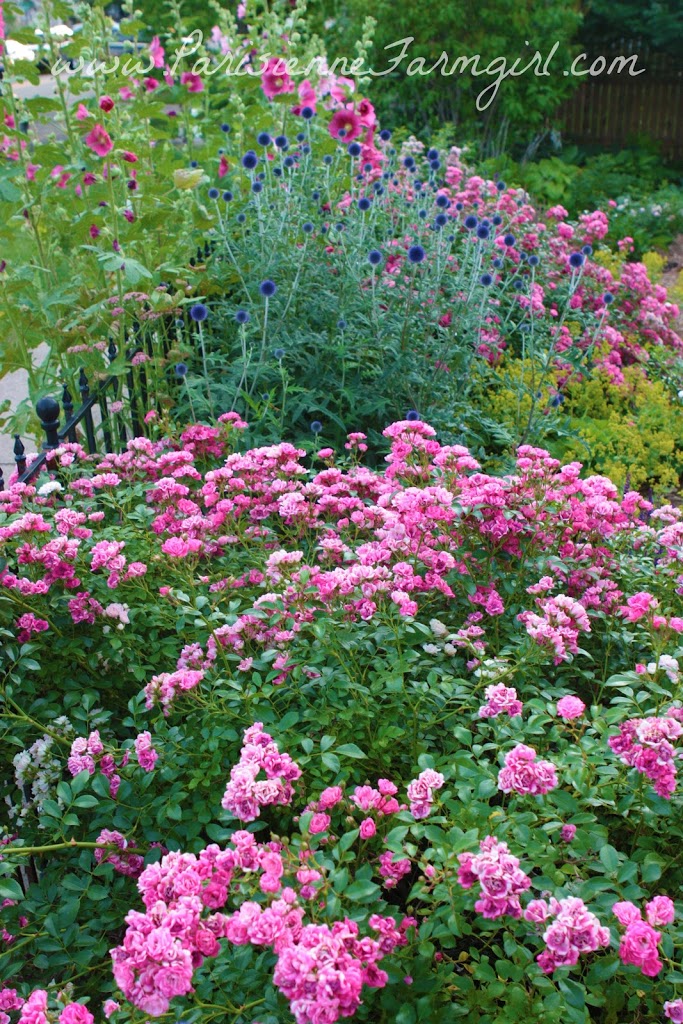 Purple globe thistle – bestill my heart.
I’ll be taking some of that too! 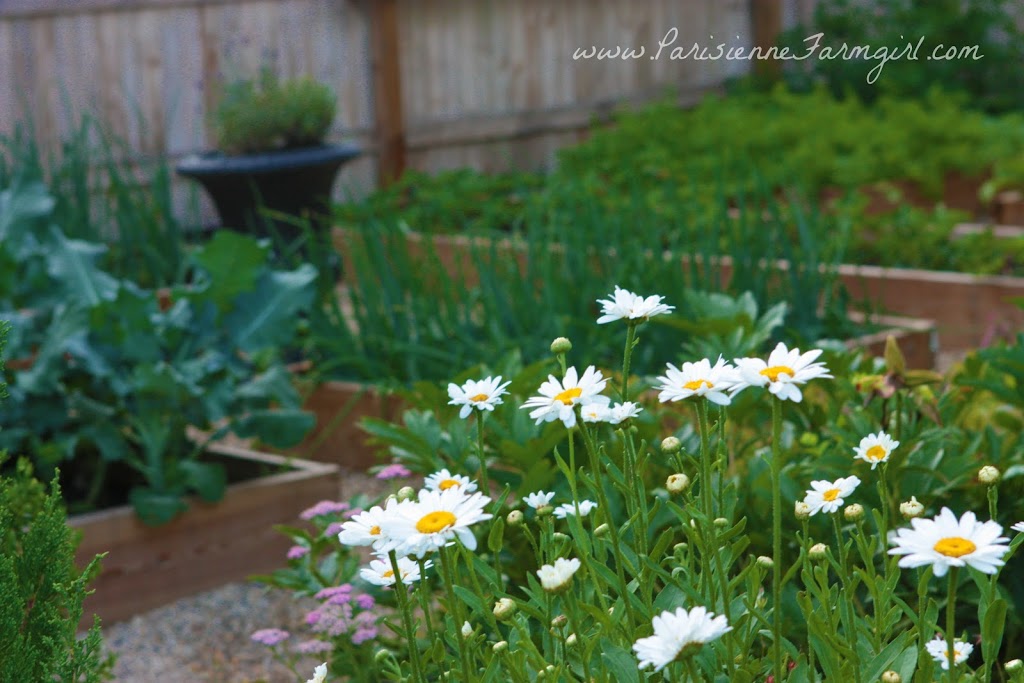 Daisy’s from my Aunt Julee’s garden. 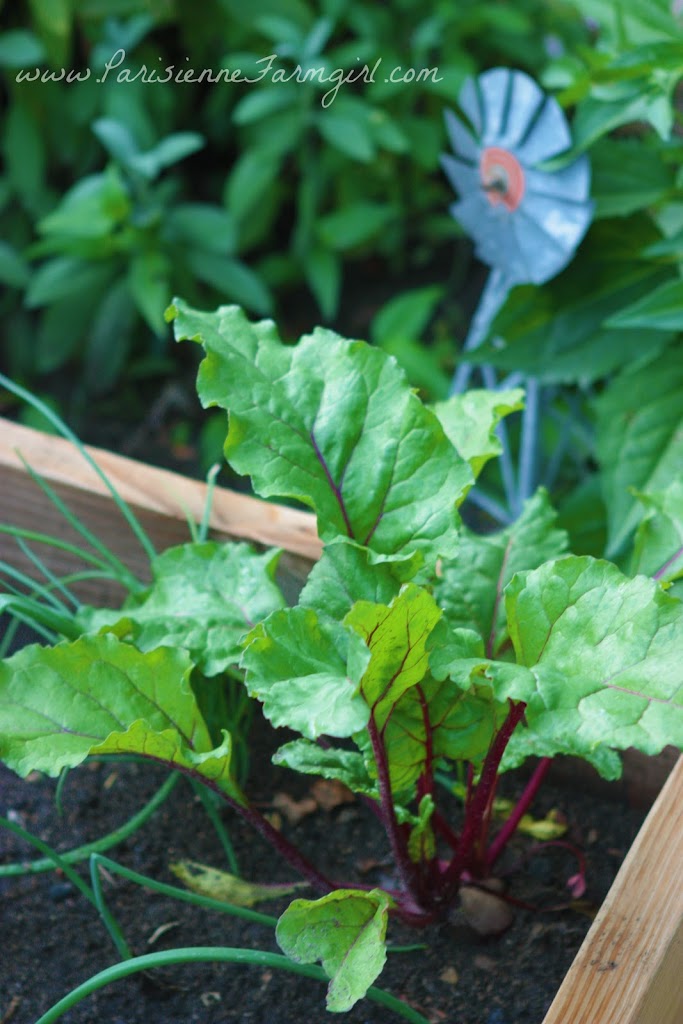 A tribute to our someday farm… a little galvanized windmill. 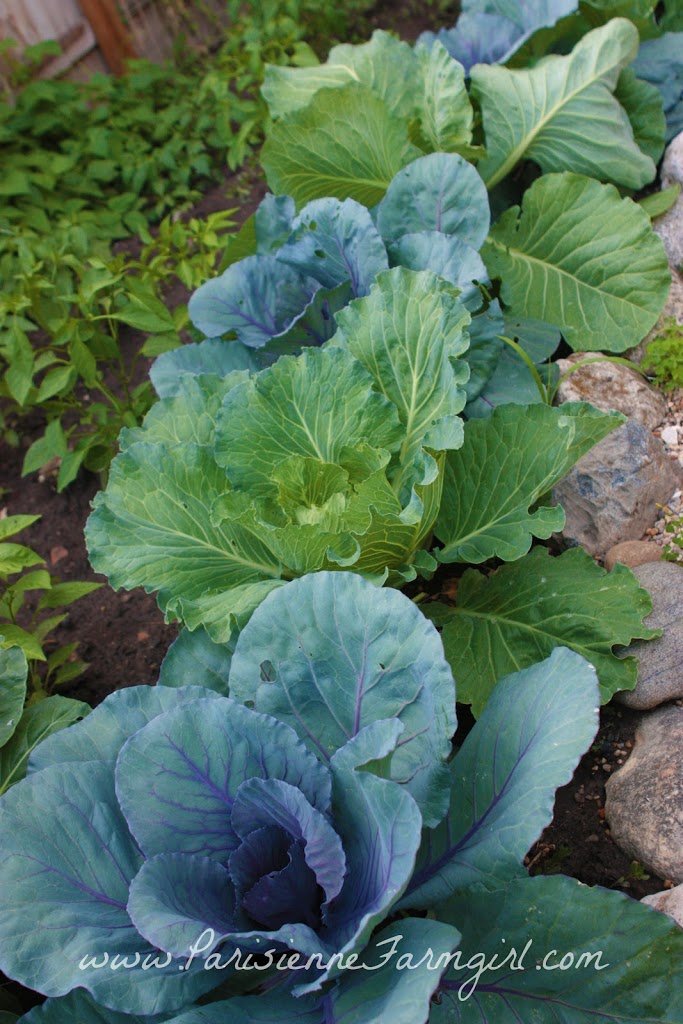 Savez-vous planter les chou?
Thanks for letting me get it out girls.
Oh, and someone recently emailed me and asked if I was on Facebook and Twitter –
Mais oui.
I was reluctant but here’s the lowdown—
Pinterest – just click the link on my sidebar.
Parisienne Farmgirl is on Facebook –
come and put in a friend request.
On Twitter — @theParisienneFG
The magazine is too…
On Facebook – Parisienne Farmgirl Magazine
(help us hit 1,000 likes!)
On Twitter — @ParisienneFarmg
Happy Pinning, Tweeting and FBing!
Amitiés,
Angela