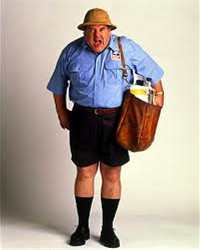 Here’s my heads up: This post reveals the more crass side of me.

I would rather pump gas, run out for diapers. Even vaccuum.
It’s one of those errands that just seems monumental
to me even though I know it shouldn’t be a big deal.

Our post office is maybe three miles away but the traffic to get there is hellacious.

I swear it takes 15 minutes to get there.
I could probably ride my bike there faster.
That is, if I could bring my knees up that close to my chest.I am now at that stage where it takes me five minutes to put on and tie my shoes.
I’m left panting for lack of lung space.So I finally carved out a moment to ship some Parisienne Farmhouse goods out and was on my way to my “favorite” government run business.
The line was small, surprisingly.
The ensuing hassle was not. Unsurprisingly.

I grabbed a stack of flat rate boxes (that I normally try to keep around the house) and began to address and pack them at the “looser” counter. It’s the looser counter because it’s set up RIGHT where people stand in line and you feel like such a looser standing there addressing, folding, packing and taping, right in everyones way… the line getting longer by the moment. Thankfully this time I remembered my own packing tape because
GOD FORBID
the post office tape the top of your package shut should you forget it. If you forget your tape they treat you like a leper… as if YOU’RE the reason the United States Post Service is broken –

You irresponsible tape hog you!

As I was going about my looser business I could not help but overhear the transaction going on between the one of two agents available (Two counters out of eight open!). Even though my back was turned, it was obvious what was going on…

Agent: “You need to write the address on this package.”

Agent: “This is just a taped on customs form. What if it comes off? You need to write the address on the package.”

Agent: “YOU DON’T UNDERSTAND ME DO YOU?
YOU NEED TO WRITE THE ADDRESS ON THE PACKAGE!
WHAT IF THIS FORM GETS RIPPED OFF?!
WHAT LANGUAGE DO YOU SPEAK?”

Agent (Doing her best to now completely humiliate this young man):
“WHAT HAPPENS IF THIS FORM FALLS OFF? THE ADDRESS NEEDS TO BE WRITTEN ON THE PACKAGE!”

By now I’ve turned around and taken my place in line watching this disgusting display of humanity going on. I wanted to slap the bitch. She could have just done it for him, it would have taken her thirty seconds. But no, this was her shining moment.
To shaaaaaaaaaaaaaaaame him.

What is it that happens to people when they think that
SCREAMING AT SOMEONE
is going to cause some sort of linguistic, epiphany-like moment?
I mean good night, when was the last time you flipped on Telemundo, wondered what the scantily clad telenovela star was saying, grabbed your remote and turned it up full blast only to miraculously completely understand the story line?


I’m sure we have all done it, raised our voice so someone would hopefully understand us. Let’s just agree, here and now to NEVER do it again. If I have never mentioned it before, I HATE it when people speak loudly. It aggravates the crap out of me, I am mortified when I do it and thoroughly irritated when anyone speaks louder than needed. We, especially women, only need to speak loud enough so that the person we are talking to can here us, there is NO NEED to project into the next room or twenty feet away for that matter. How about a little self awareness?

I digress.
As I often do.

Look, I am not saying the kid shouldn’t need to be able to speak English. It aggravates the CRAP out of me when people don’t know the basics of our language. I mean, do we really have to print the word for “tampon” in Spanish on the Tampax box? I think if you live in this country and can’t walk into Target and figure out how to attend to your basic feminine needs in ENGLISH than you’ve got bigger problems than white jeans. But there is NO REASON to belittle another human being in public with your loud, big, condescending yapper if they don’t happen to understand you. I was a good twenty five feet away from her or else I don’t know if I could have controlled my own yapper I wanted to tell her to shut up so badly.

I stood there praying she would not be the one ringing me up.
God always answers prayers…
He says, “Not right now”, “No” and “Yes”.
I got my answer as she barked,

Ok Lord, what are you trying to teach me now?

I held my tongue over her previous behavior and I handed her my three self-taped boxes, and the first two where no problem, “Where is this one going” she asks. Um, not only are you loud but you’re apparently geographically challenged too – it said,

“United Kingdom”
You work at the post office – shouldn’t you know where that is?
I proceed to explain and she cut me off, “Did you fill out customs paperwork?”
Well no, I didn’t.I don’t ship overseas, it’s not a friggin’ sofa, it’s a dish, so no, customs paperwork didn’t cross my mind – I was too busy being appalled at your behavior to the poor Russian kid.So you guessed it. I had to get out of line and go back to the looser counter. She said it was TONS of paperwork.
It was TWO addresses and the value of the contents.Apparently I don’t do well in public.
I’m crabby, I’m hot, I’m pregnant.
I’d rather be vacuuming.
My blood was beginning to boil.

I stood in line…
AND GOT HER AGAIN!

Now what I didn’t mention was that I wasn’t going to originally ship “the dish” to the mysterious, other-side-of-the-world United Kingdom. I was simply going to get a price for the shipping but while originally standing in line I saw the sign over the flat rate boxes…

…Now this happened a few days ago, so I may be a little off on the exact wording of the sign but it had the word “convenient” and the last four words where “Flat Rate Shipping Worldwide”.
I read it a couple times and thought,
“No way! That is so incredible! Worldwide? Really?”
So I read it again, and again and then grabbed a box big enough to hold this dish… fast forward back to me in line with my customs form.

She rings up the first two packages, then rings up my dish to the land of William and Katherine… my ten dollar flat rate box rings up FORTY FIVE DOLLARS. So, I say,
“Whoa, it says “Flat Rate Shipping Worldwide” and she says,
“That’s domestic, this is overseas.”

Stupid me, as if I am going to win this fight,
“But WORLDWIDE means overseas.”

Agent: “No, the flat rate is for the domestic price.”

Me: “Then WHY does it say FLAT-RATE…WORLDWIDE???”

She just stares back at me.
Like, get out of here you idiot. Don’t question the post office.

I snatched the box off the scale and snarled,
“Forget it!”
I wanted to rip her smug face off.
I wanted to “Go Postal.”
I had to get out of there fast.
So I ripped my debit card thru the machine, I am surprised there was a magnetic strip left. Pounded in my pin and hightailed it out of there drawing on every iota of self control in my body lest I make a complete
HARPY
of myself.

Did I mention I hate the post office?
Grrrrrrrrr…..