My Dream – The Amazing Race 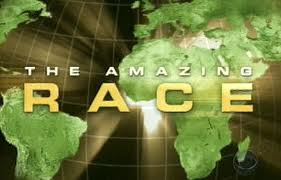 The latest sermon from Mark Driscoll at Mars Hill Church in Seattle, not Michigan.  AND…

What can I say?  I don’t watch T.V.  But Monday night you can bet your bootie I am on CBS.com to watch the Amazing Race.  This is season seventeen and I am no less enthused.

Passion Alert:  Here me out…

There are a few things in life that bring tears to my eyes… My desire for my kids to know the Lord, my love for my Hubby, my desire to know Paris/France better, my desire to Tango, my desire for a farm of our own and… I know this is corny… but my desire to be a contestant… WITH JOEL on the Amazing Race.

Back when this show débuted we watched T.V. and I became totally hooked and since then I have not missed a season.  I can tell you every stupid mistake and every BRILLIANT move over the years.  And lest you think I am an ego-maniac (said the blogger with her own photo on her header!!!!) I think we could kick some BOOT-AYE on that game! 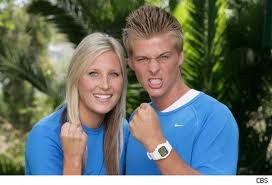 One of our Favorite teams… and we loved the Cowboys too!

First and formost I think my completely jaded attitude would come in handy.  As mentioned in many previous posts, I am not a gushy, ra-ra type woman… though I was a cheerleader in high school.  If I was on the Amazing Race, you would NEVER, I mean never hear me gush about someone being “so sweet” that I wanted to team up with them, I would NEVER wait around for another team to finish so we could “work together”… (ok, probably never) I would NEVER wuss out on a task… I mean NEVER!!!!  Remember that D-U-M-B girl last year that was so scared she would not even go down a WATER SLIDE!!!!


In all seventeen seasons of The Amazing Race there have been two tasks that I wondered if I could do mentally or physically:
1.  IT was a LONG time ago but it had something to do with walking past chained tigers.  Yeah, I have nightmares about giant cats.  Yikes.  I would not NOT do it, but man, I might puke.

2.  The one time they had to crawl into one of the Great Pyramids.  Long time readers remember my post about crawling into the trunk of my car to fix it… I am claustrophobic and I tell you what, I don’t know what the rules are, but I might have to have a pint of whiskey in my giant back pack in order to do me some Egyptian treasure hunting.  It’s called, Liquid Courage.

Joel and I watch the show together and we discuss who would take each challenge in a particular situation.  For example, if eating crispy, fried bugs somewhere in Africa were on the menu (which is pretty tacky and not often a tactic of the Amazing Race) I would do it, cause Joel would never make it,   I would also handle any clues having to do with unscrambling Cyrillic letters and what not… but he would handle feats of great strength or those having to do with something gross like Wasabi.  Barf.

For protection yes, for wisdom yes… but come on… “help us beat that other couple” ??? I don’t think so.

There are reasons I think we would rock it and not embarrass ourselves at least not too bad:

Things that do freak me out –

I can assure you though that the other teams will hate me!!!  I PROMISE!  That’s just how it works… show a little confidence… don’t pass out the mushy-ga-ga hugs = they don’t like you!!!

I promise you, my friends, family and sweet readers if I ever make the Amazing Race I will not run around the planet in skin tight black capri leggings… I would stink bad enough in Thailand, let along in skin tight lycra.  And I won’t push Lucy and Ethel up to my nose for the world to see either.

I LONG to run this race… and hopefully I have not given away enough of my strategic ideas… but really, I know what fricken Stonehenge is for Pete’s sak, I know how to swim and would never mistake QU II for Jaquline Kennedy… OMGOSH some people are so clueless.

Our family… well, we don’t think it’s done growing… but Hubby did BLOW MY MIND the other night when I was expressing my heartfelt desire to compete in this game… he said, “You may just get your chance”… now, that is a really big deal… so all you wanna be T.A.R. hopefulls better watch out!!!!