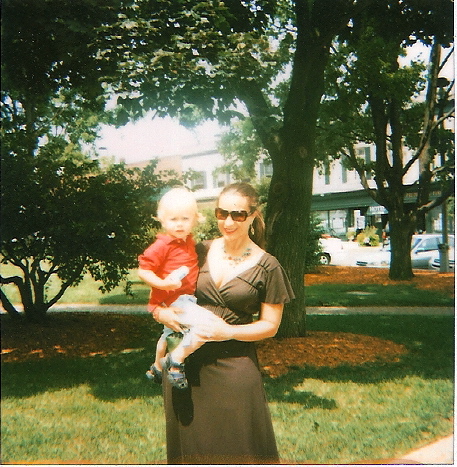 Moms of sons, have you experienced moments with your son that were for lack of a better word – romantic?

I have noticed throughout the last two years that I have had moments with my P.R. that have been truly romantic. Sunday morning was unexpectedly one of them.

Joel had to work on Sunday which is not a typical thing in our house – weekends let alone Sundays are sacred but then again so are vacations and we have not taken one more than four days longs since our big Paris vacation three years ago.

(Six weeks for me and two for Joel in Paris really should last one about a decade but when you work as hard as Joel does you long to not only put your brush down but go without looking at it for at least a week.)

En tout cas we need every centime – when you are self employed there is no paid vacation unless you pay for it.

What a treat – I got to sleep in for the first time in months rolled out of bed a little before 9am and by 9:45 had bathed the babes and we were on our way to church with me doing my makeup at stop lights. Superwoman.

Aidan has been sitting with us in big church but as of last week he wanted to go in with the big kids (3-5) and they let him – well two thirds into the service his number flashed on the screen so I went down to rescue him. He just wanted his Momma. It was about 120 degrees in his room – I would not want to play in there either. Both of us were sweating like crazy by the time we made it back to “big church.” He sat really good and quiet for about ten minutes but he started to sqirm and talk loudly about my “rouge” beads on my necklace so I thought we’d better go – pastor had only one more point to make anyways.

We go to church in a nearby town that has a beautiful historic square and I thought why go home? NASCAR was on cable so I would have had to listen to the radio anyways, it was about 90 degrees out but too close to naptime to head to the beach – we were going on a date.

Within minutes we were parking on a brick street on the square and window shopping. I remembered the hobby shop. What would be more fun for my little guy than to watch the model trains run in all their glory? He stood transfixed for a good ten minutes as we watched them go round and round thru their little towns, carnivals and mountains. We were admiring a red and black set when I realized we were watching a number 8 engine go round – then I look again. The whole dang train was Dale Junior. It fits the scale size than my Dad has been collecting for Aidan – a “mere” $269.00 for the set. I want it SO BAD!!! They have two left. Do you know how special that would be to have when in a few months our precious number Eight Bud car will be no longer? Ugh, I can’t even thing about it. (Now accepting donations)

We still had the store to ourselves when I realized Aidan could probably handle the slot cars since there were no big boys around. I took a little grocery money and rented him a car, a handle and 15 minutes.

What a joy! The kid tore it up – did not crash once and the look in his eyes was pure elation. He is obsessed with driving (I now have to keep my cars doors locked in the driveway as I have more than once found him jerking the steering wheel back and forth, flashers flashing, window wipers going…). I found myself sitting in my dress on this filthy hobby shop floor staring at my son’s face – we might as well have been riding in Cinderella’s carriage for me.

When his 15 minutes were done the car came to a stop and Aidan instantly burst into tears. I quickly ordered another round. This time he lasted about 10 minutes and then wanted to go back and forth between watching the trains and racing and this time when our time was up we left for a little more window shopping. The second round was free – the owner saying that Aidan was better behaved than all the other boys that come in.

After a bit we walked to the middle of the square, classical music piped throughout the air Aidan kept saying, “I see it?” trying to find the source of the music, expecting lived musicians hiding somewhere in the park.

There was a bench with a few “ol lady” as Aidan would say and each time we passed them they would comment to each other on the beautiful little boy with his head full of curls. I must admit he was especially darling on Sunday. Clean blond curls, daddies colonge, navy and white striped shorts with his darling navy sandels and a red polo. Passing them again he made eye contact with them and hid his face, I was carrying him so I turned him around to say hello to them when one with more vigor then I ever thought she could muster one ol’ lady JUMPED up and said, “I”l take your picture!” She whipped out a poleroid and snapped our photograph and that was when I about lost it. These moments alone with Aidan are so precious. Very soon my attention will be divided and sooner than I realize attention will be divided between friends, hobbies and finally adulthood. I won’t be able to lift him into my arms or watch his eyes light up over a silly slot car forever. (Ok, now I am sobbing…)

Finally it was time to come home, we ate some lunch together and took our aftenoon naps; Joel came home just as we were waking up and we decided to go on a walk together.

Aidan loves to run around the block but this time half way around it began to sprinkle. There was no thunder so Joel did not freak out (after our tree getting stuck last year he is more cautious than EVER!) so there we were en famille running around the block, back home as fast as we could in pouring, pouring rain! Neighbors setting out their thirsty hanging baskets invited us to take shelter on their porch but we ran on. So romantic.

Finally to our own porch Joel escaped inside and Aidan and I played Legos and tried to empty out his wagon as sheets of the heaviest, most humid rain I have ever felt assailed us. We were giggling with delight.

Twenty minutes passed and the sky began to clear to which Aidan looked up and yelled to the heavens, “More!” but the following sprinkles did nothing to recapture the moment. The day was over and evening bedtime was fast approaching.

Whispering, “Bon soir mon Toutou.” I knew I had fallen in love with my son a thousand times again that day. I wonder how I will contain myself when I am eighty, out in my garden and the heavens open and I remember this special Sunday with my son.

I have photos us us soaked out in the rain but I will put them on tonight – I need my nap now!