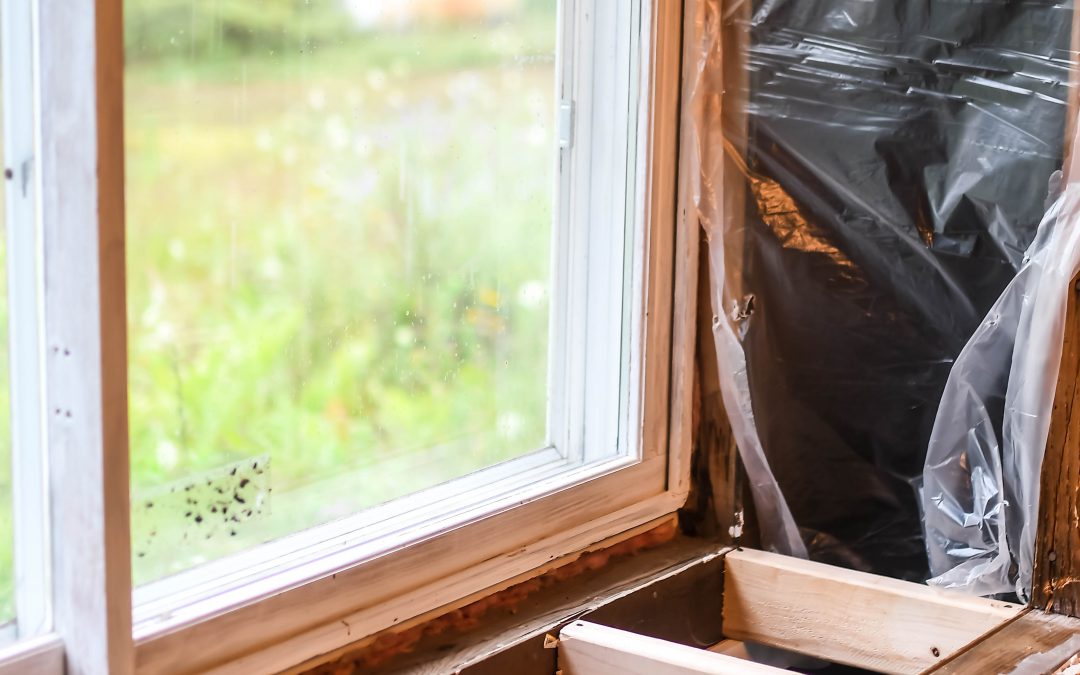 Can we talk about my non-existent stone windowsill, please? I have to confess, (here she does again) being an über creative person with waaaaaaaaaaay too much vision has its drawbacks.  Creativity ebbs and flows but when it flows, it’s a beast.   Almost manic.   It’s chemical.  It’s there.  It has to come OUT!   That can be a drawback.  The biggest being, that in my MIND, I can see things finished.  Instantly.

And while that’s very inspiring, it can create some discontent as well.   It’s easy for people to say, “be patient”, “calm down”… but I am patient and I am calm.  (a mon avis).  Forward motion thrills me.   Each day to be savored, enjoyed and dare I say… ATTACKED.    When it feels like progress is lacking, I go a bit nuts.  I’m that person that thinks, shouldn’t we ALWAYS be improving?     Improving our selves, our habits, our knowledge, our environment, our joie de vivre?    It’s that environment one that can be a bit pesky.  I look around at what we’ve done in this environment that we are creating and I know it’s a lot, but right now if FEELS more like one hundred half-started projects that got paused to go work the gardens.

I’m not crazy, hear me out.  I KNOW, we’ve made progress:

-Put in an orchard

-Had lambs (those lambs are destroying said orchard)

-Painted what you can see of the outside of the house (truth be told, I don’t care if the back takes two more years!)

-Put in a summer kitchen

-Stone stairs to the house

SO much that I haven’t shared, simply because we’ve been so busy in the garden since April.  And actually, sometimes I get insecure about bringing you so many things that are “in-process”.  (I forget others enjoy watching the process).   But DARN it anyways.   The housewife in me is going a little stir crazy with the uglier side of what’s going on around here.   So, the other day I “lovingly” put my foot down while I was prepping to make dinner.   Come on, can I get an “amen”?   How many of my friends here have “gently” talked their husband out of taking a nap so something could get DONE???   I mean, the man works hard, but I don’t get to nap in the middle of the day… just saying.  🙂

Back in April, we ripped off the second of three of the dreadful envelope windows. 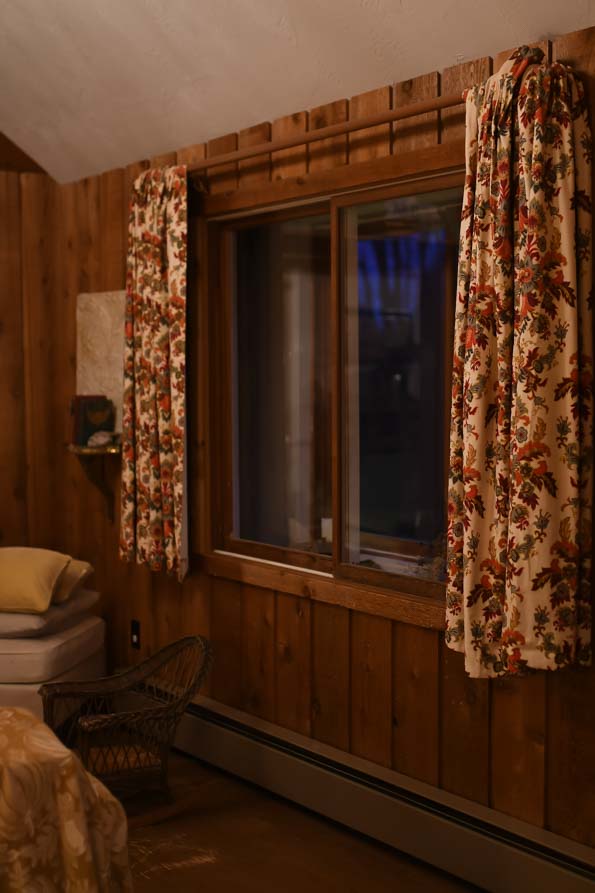 They all looked like this.  Miniature sliding glass doors, with a view to the basement and a charming plastic grate.  NOT.

The first one we went after came out beautifully as you can see here.  From horrid rough-hewn cedar (like having giant walls of Velcro) to soothing creme shiplap and Windsor blue built-ins and a nice deep windowsill.

Contrary to what everyone thinks, framing out these windows has NO effect on the effectiveness of the house.

And now, back to the kitchen and as to why I decided no napping was going to be involved yesterday…   You see, we tore the kitchen windows off in APRIL and then stapled PLASTIC around the window so Junior couldn’t fall through to the basement.  (Remember, it’s an envelope house, we are are a house within a house meaning on one side, the side with these dreadful windows, you can stick your head in the gap and see all the way down to the basement and all the way up to the attic.) 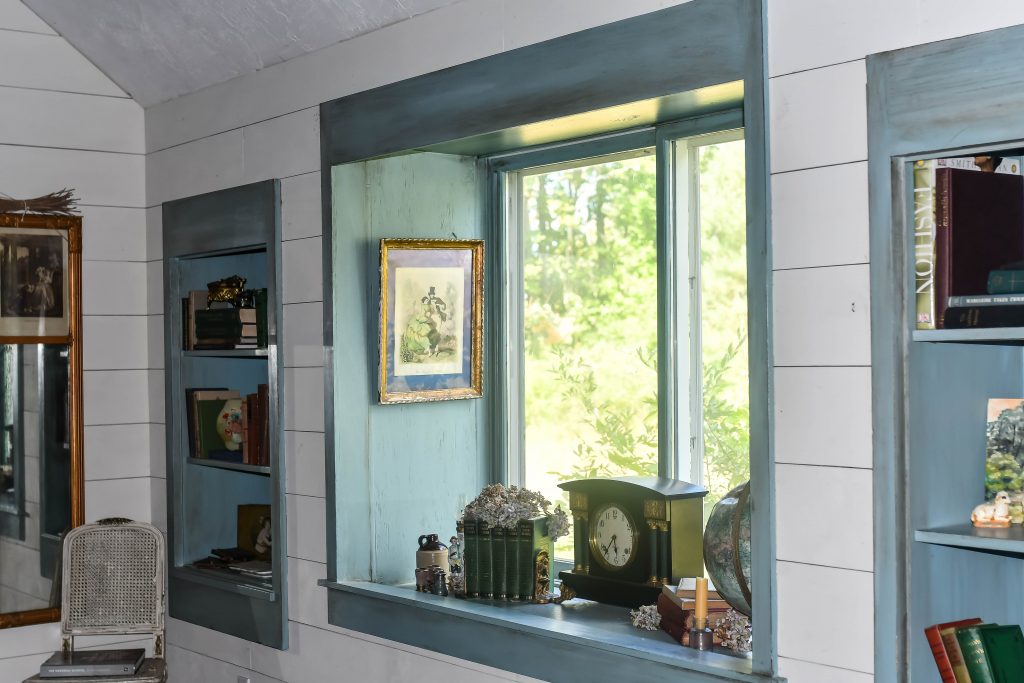 Mind the gap?  Oh, I’ve been minding it girlfriend. Since April.   Photographing around it, and listening to the plastic rustle on terribly windy days, and this party is OVER. 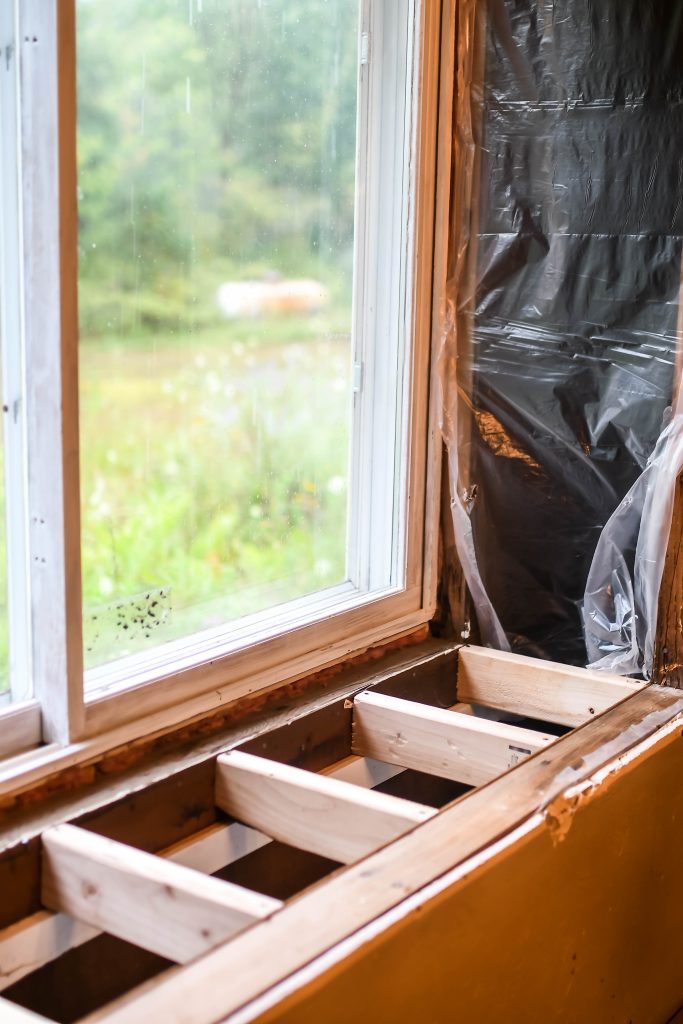 I’m the stonemasonette around here and I’m DYING to create this baby that’s been floating around in my brain the better part of this year.   A deep set, very Celtic, stone windowsill.   I have leftover stone from the faux hearth project last summer and it’s calling my name, begging to be used.   And so, no nap for Joel.  I gave him magic potion of his LLV and waived some Motivate under his nose and I sent him to the lumberyard for wood to frame this beast out.  It has to be strong to support the stone.   I must have been feeling desperate because to have air compressors running and all that racket, while I made dinner, was not fun.   Dinner prep is my hour with a glass of wine and a Pandora playlist.   But I sacrificed romantic, peaceful time in the kitchen for progress on a romantic stone windowsill.   Fair enough.  We’re on our way and DARNED if I’m not going to have this project done by the weekend!

Deep stone windowsills are seen in French cottages, in homes on Mont Saint-Michel, in countless English country houses, farms, and cottages.   I think it’s just one more detail to push this house further into the past.   What do you think?

(PS:  Be sure to subscribe to my Parisienne Farmgirl newsletter.  She’s getting a makeover and début’s Monday, September 16th!  You don’t want to miss it!) 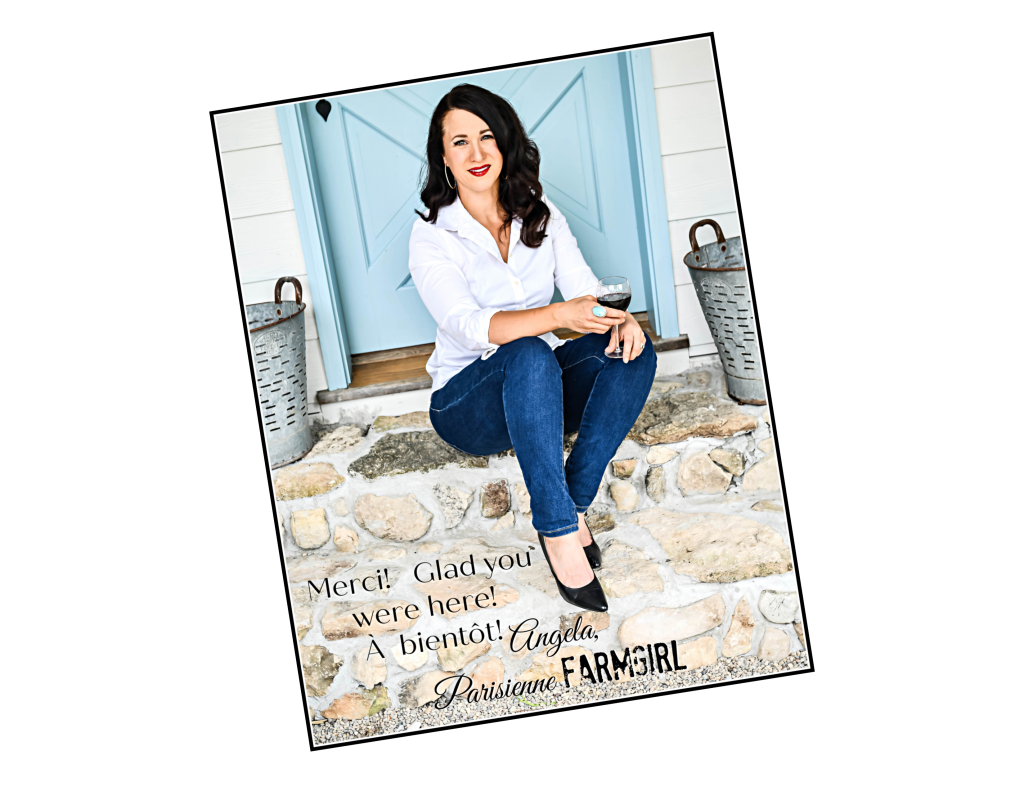