Awhile back I mentioned I had seen Marie Antoinette and did not, at the time have the time to “blog” about it…
Et voila – here I am.

If there is an ounce of estrogen coursing thru your veins then what is NOT to love? Visually this film was a spectacle but of course it took place at Versailles… spectacle of all spectacles! Jewels and colors, frocks and ridiculously towering hairdos ruled the day along with this misunderstood queen. You only have to dip your toe into the history of what “court life” was like at Versailles to see that this poor thing did not stand a chance fitting in…oddly like another princess so near to my heart…

To the ears, Marie Antoinette was an dance party! This soundtrack rocks our house daily lately! How in the world Sophia Copolla had the genius to combine, sensual and angst filled music from the 80’s with classically styled music (that I believe was made for the film) is beyond me. The music is truly a character in the film.
There are so many wonderful stories to be told it is about time that someone payed homage to this queen (I believe the last film based on her life was made in 1923).
Ever the royalist I felt badly for her. She never said “let them eat cake” but the film kind of hints that she did – sadly it is what she is known best for so I suppose they caved to the pressure and added that scene. She did what many housewives in America do with inattentive husbands…spend their money. For that, they labeled her a whore and sent her to the guillotine. Of course her story is more detailed than that and I was grateful to the director for ending on a beautiful and moving note instead of her dignified expression on the way to her death.
For more on this amazing piece of history you might enjoy the French film Ridicule. This film, though not sympathetic to the queen it gives you and idea of th 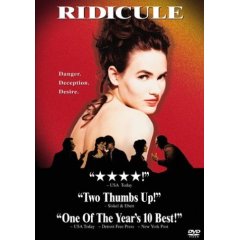 e ridiculous nature of the propriety of the court at Versailles.
And for a more detailed account of her life may I suggest:
Queen of France by Castelot
and Marie Antoinette by F. W. Kenyon both I believe are out of print but worth the hunt for a die hard Francophile!