The Launch Party! Budget, Recipes and Menus, Oh My! 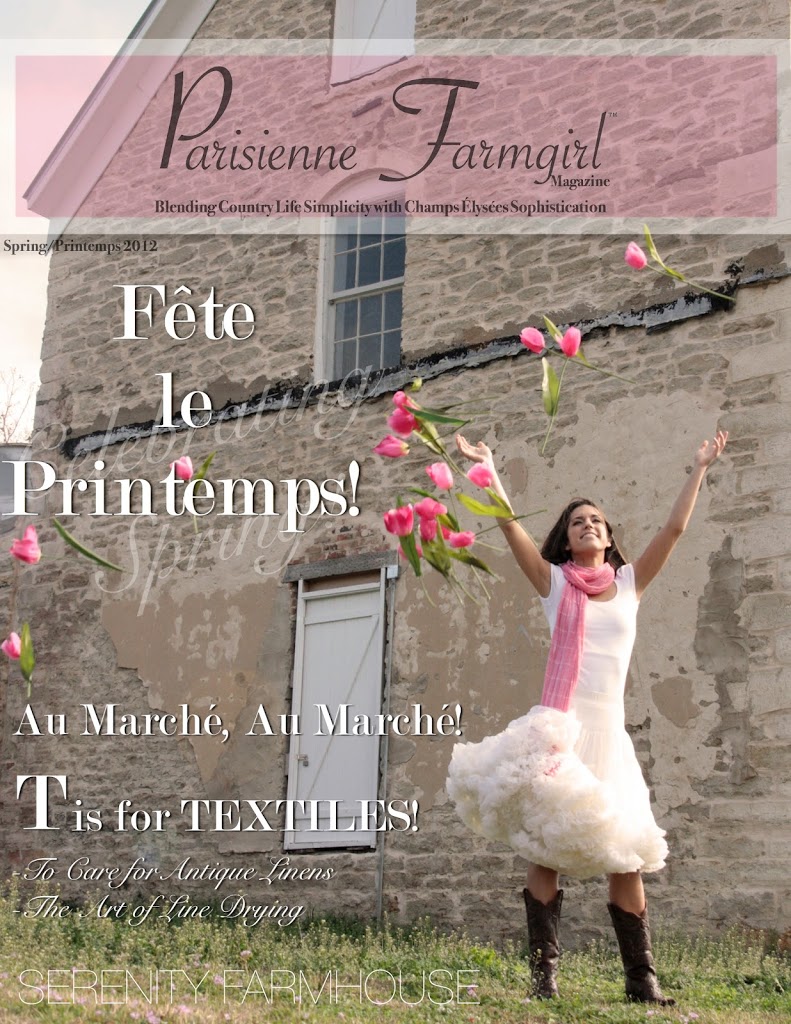 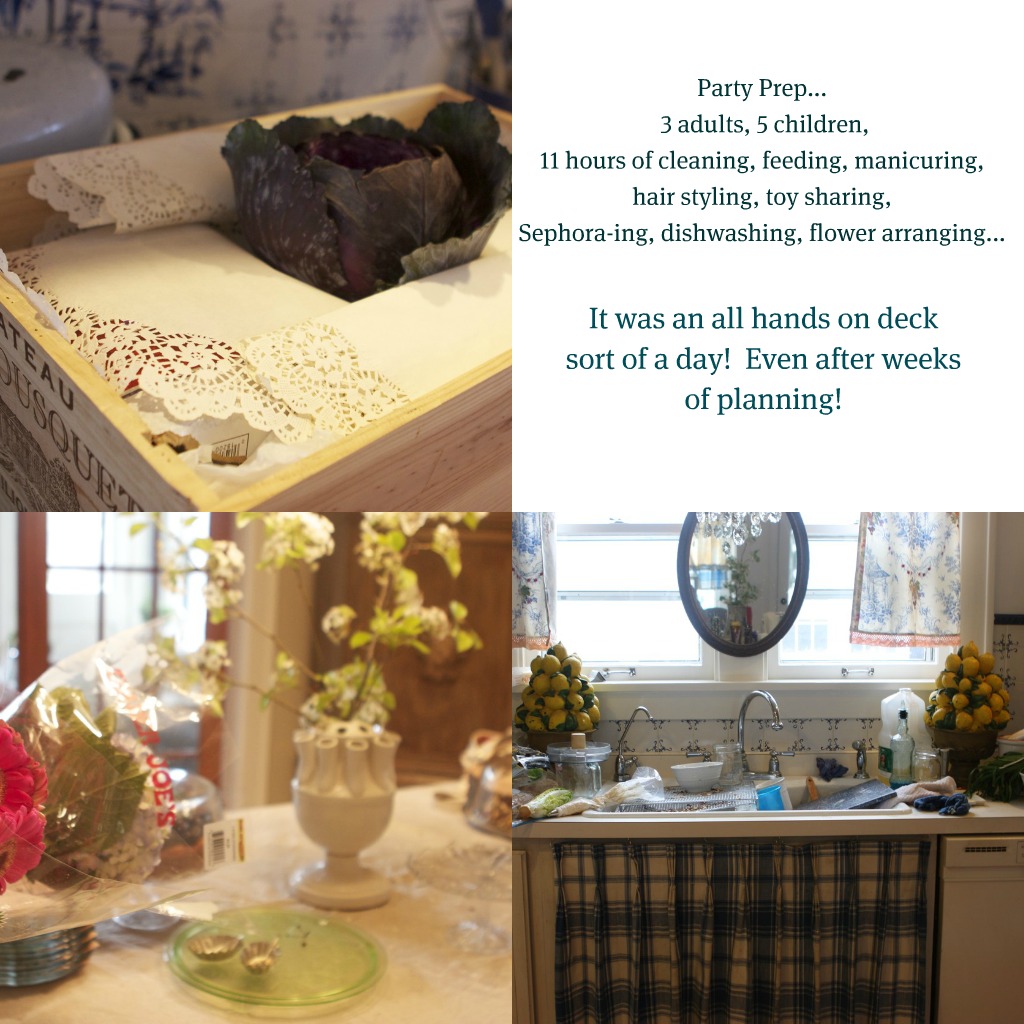 SIL, fabulous friend, Auntie and Fashion Editor for PFM, Victoria came down on Friday night… we stayed up WAY to late watching What Not to Wear episodes on YouTube and started Party Prep around 8 am on Saturday.
Prepping for a party with 5 kids in the house under 7 is…how shall we say this…
A LOT OF WORK!
I mean, they actually want you to STOP what you are doing and FEED THEM three times a day!
What’s up with that?
Thankfully I had made the macarons and the cakes earlier in the week or else we might have finished around midnight. We WERE able to cut away at nap time thanks to hubby who held down the fort – we went out for a no-chip mani and a heady run thru Sephora!
Waaaaaaaay too much fun!
By 6:30 the three little ones were down, my hair was done thanks to my stylist friend Anna… more about her later, Victoria was primping and my helper for the night (Gina) had shown up to cut the bread, wipe down the champagne flutes and look for spots on the silverware! That might be the most genius thing I have ever done – hire a darling high school girl from across the street to move dishes along, manage garbage, hang coats, etc! I was, despite how jittery and nervous I was, actually able to enjoy myself! 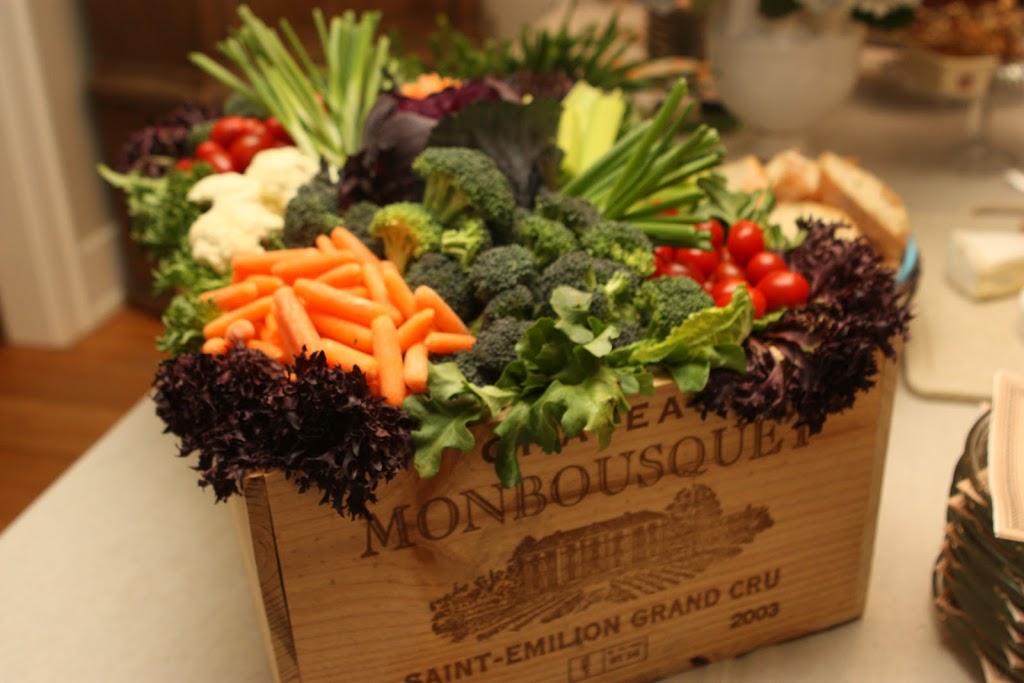 Late afternoon I was frantic for something to put my veggies in… ’til I had a total lightbulb moment and grabbed a wine crate. It was so beautiful this photo does not do it justice!!! (What you can’t really see is the red cabbage has been cut out to serve as a bowl for the dip.) 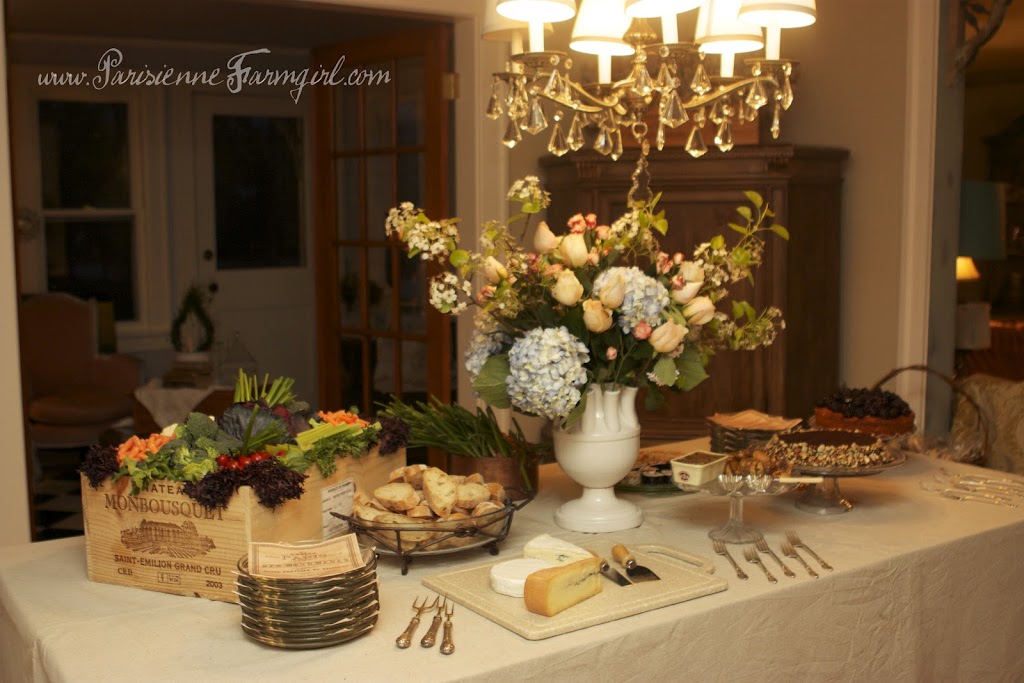 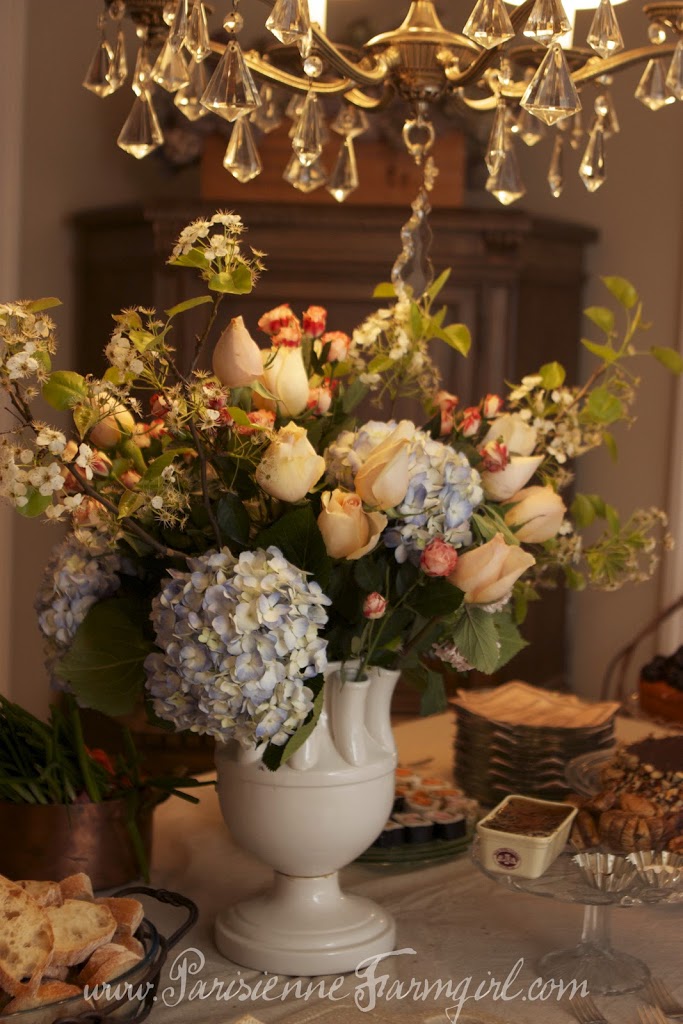 Of course, this party was planned on a budget. ($250.00)
I was able to have flowers in every room thanks to Costco, Trader Joe’s, the tree in the empty house across the street and my sweet smelling Vibernum in the backyard. 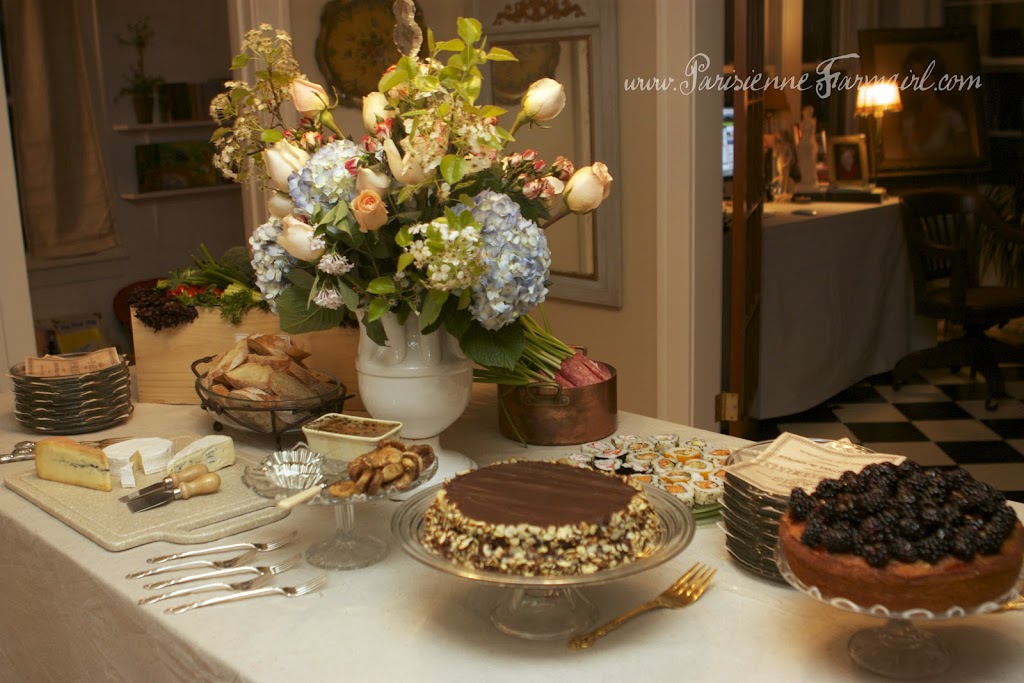 To accommodate the large crowd I made two of my Reine de Saba cakes, one 8 inch and one 9 inch and stacked them! I love the way it came out. 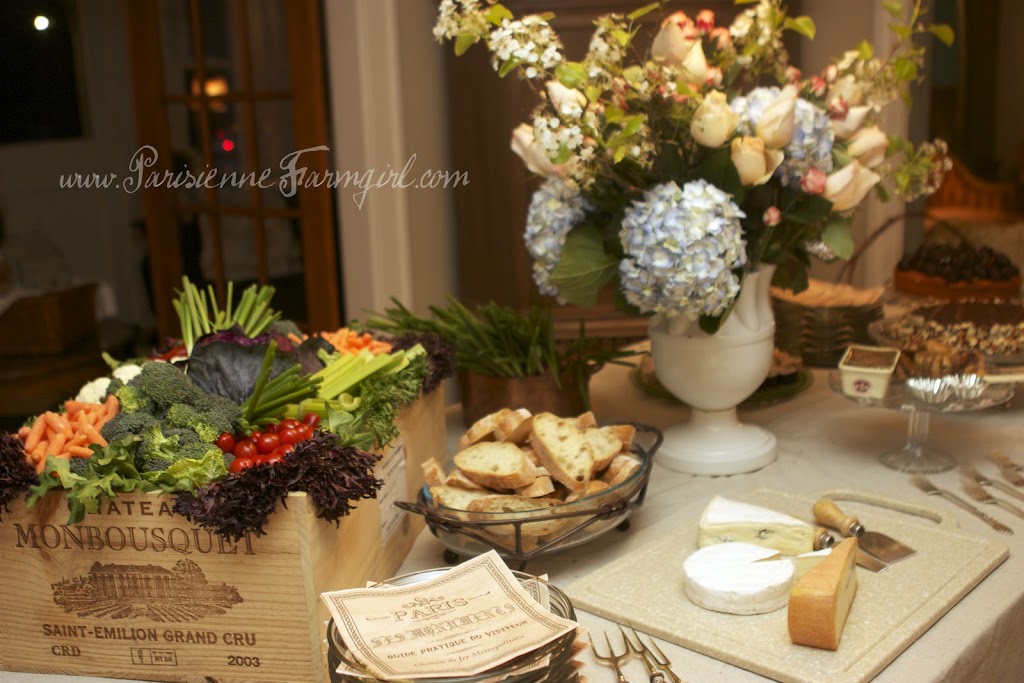 I do not like to use plastic at parties but for large groups I don’t have enough mis-matched China so I use clear glass plates from the dollar store (I have had them forever!) and beautiful napkins (These lovelies were perfect for my colors this evening – I bought them at Romancing the Home in Lake Forest, a PFM advertiser.)

I also bought 15 nice, simple wine glasses at the dollar store a couple hours before the party. My favorite champagne flutes are from a garage sale from 16 years ago – $2.00.
Too bad I forgot a photo of the beverage counter!!! 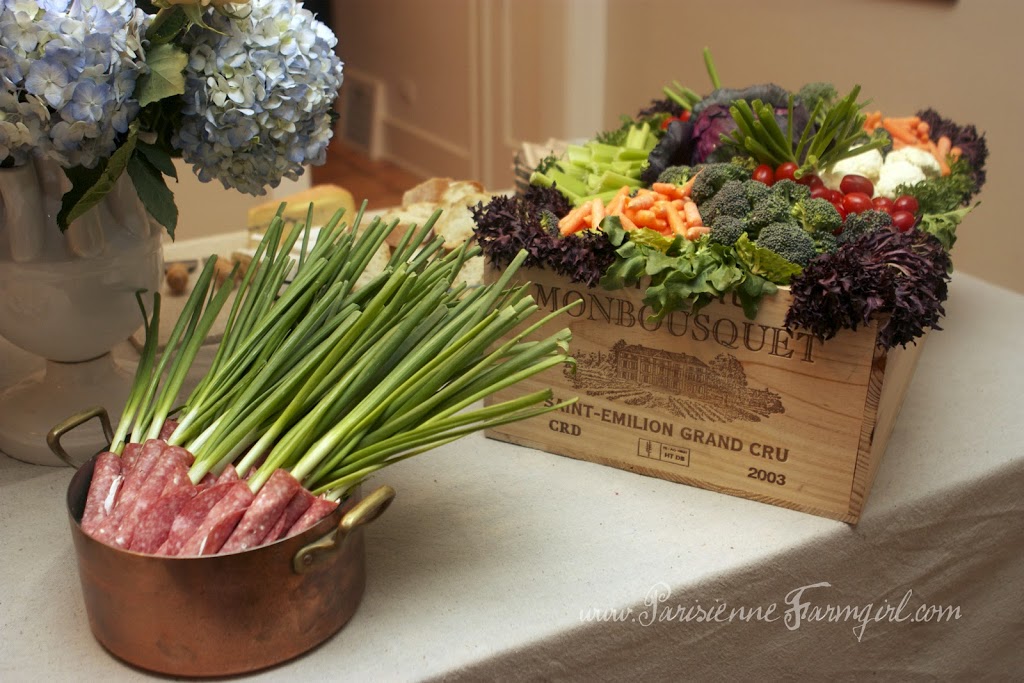 I was also frantic for something to serve my onions in and then I realized that a copper pot would add another provencal country feel to my table! It needs to be re-tinned so for safety I lined it with romaine lettuce leaves. It turned out so beautiful.
These onions were a HUGE HIT and it just made me giddy! They are SO simple and SO delicious.
Simply spread cream cheese on a thin slice of salami and wrap it around the end of a green onion. I got the green onions and cream cheese at Aldi and a big pack of salami at Costco. The total was only $12.00 but the response from the guests was out of this world! 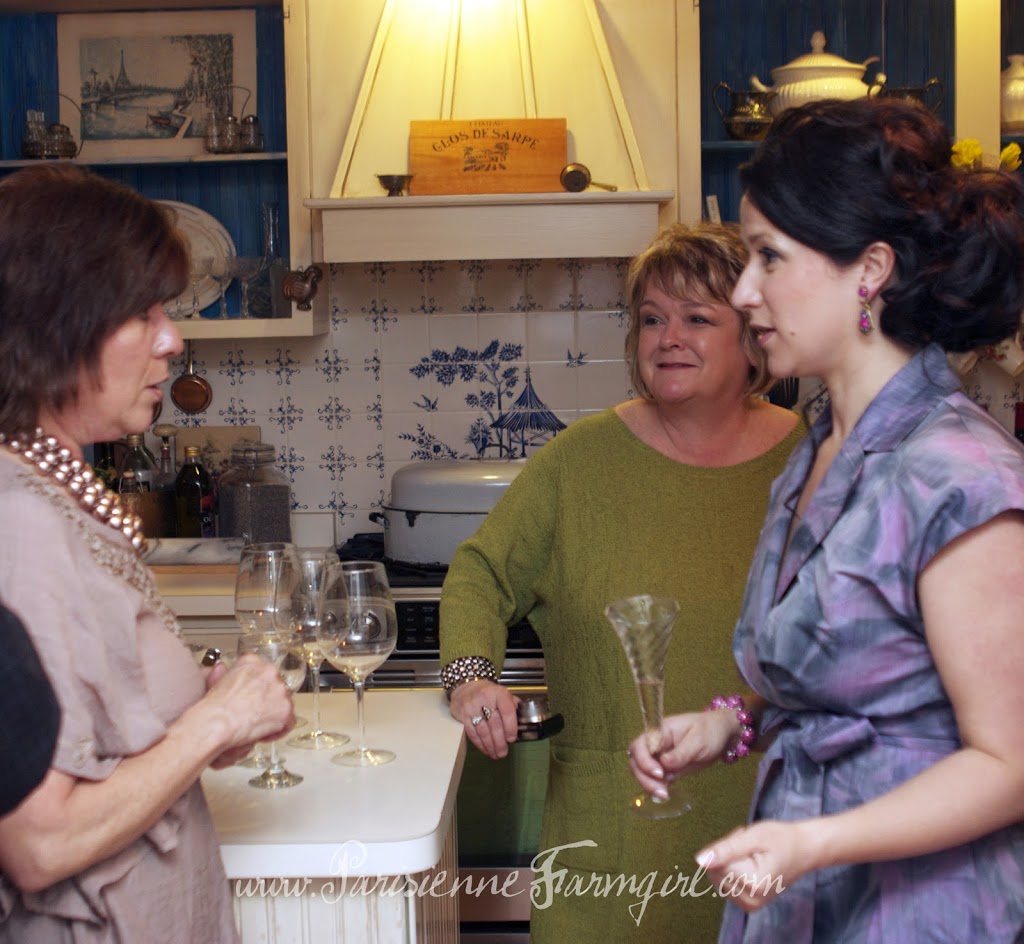 Mom, Susan (Friend and owner of Romancing the Home) and moi. 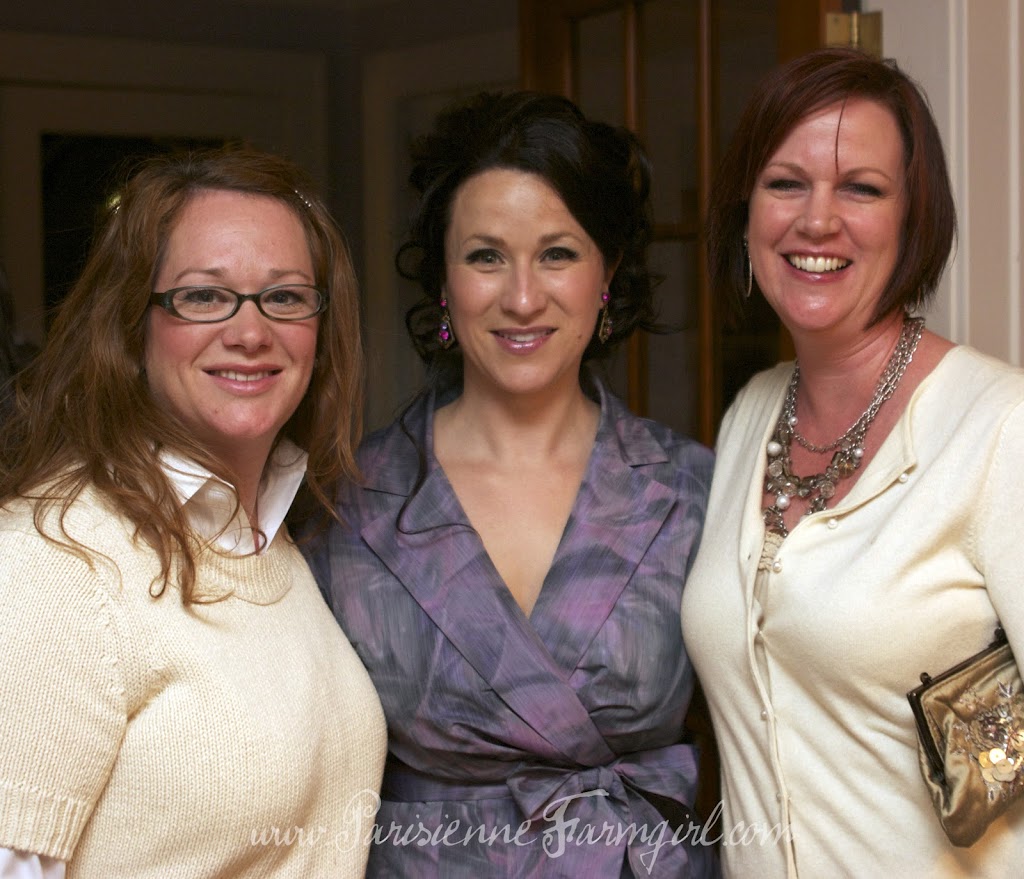 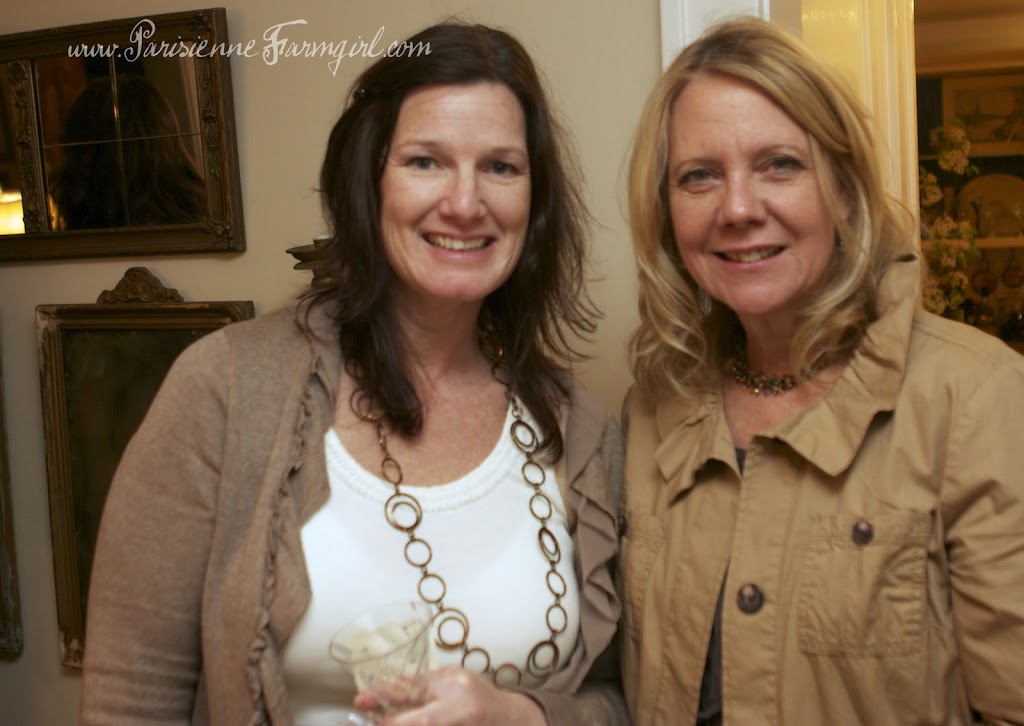 Neighbor Nancy and her sister who had taught an Annie Sloan chalk
paint class in town that day at the art studio. 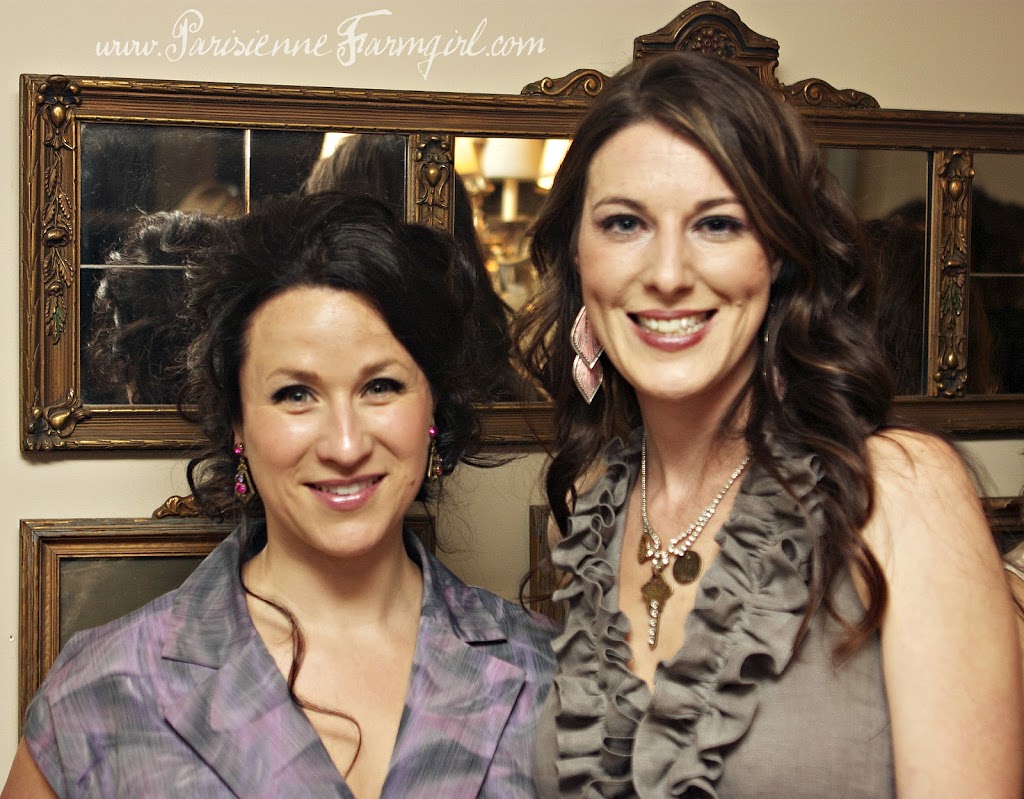 Now this was a huge treat –
that gorgeous girl you see here is Jennifer Morris of Amusing Provincial! She and her hubby drove all the way from Kansas City JUST for the launch party!
WHAT???!!!
That’s what I said!
Our moments to chat were so brief it was such a buzz kill – it was obvious that was have serious friend potential and I am looking forward to getting to know her better! How pretty is she!!!??? 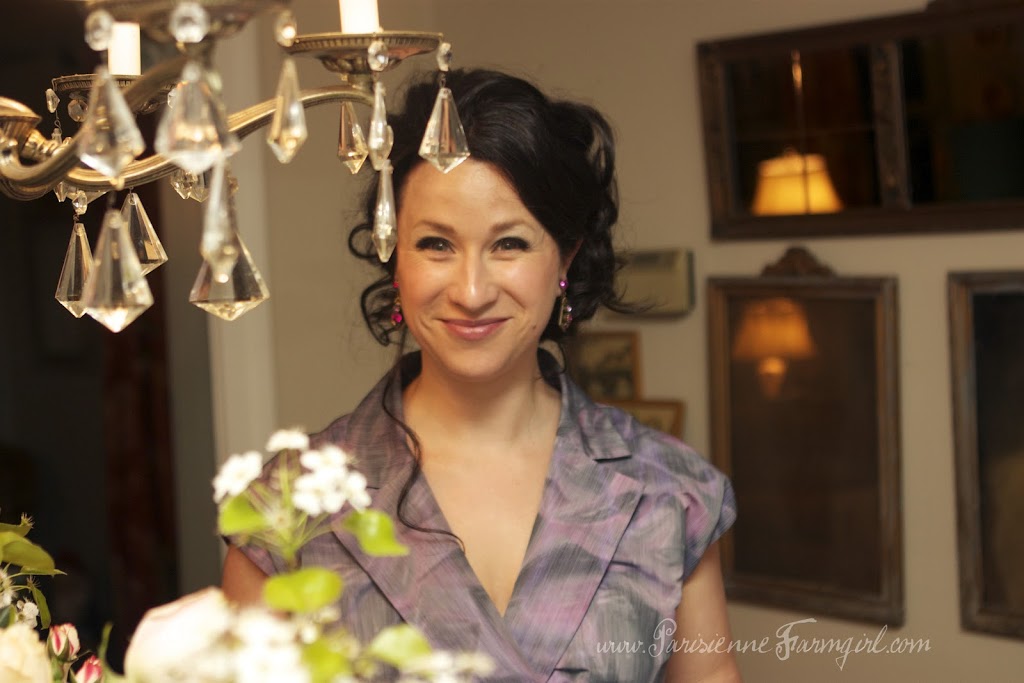 Me – Giddy but exhausted! 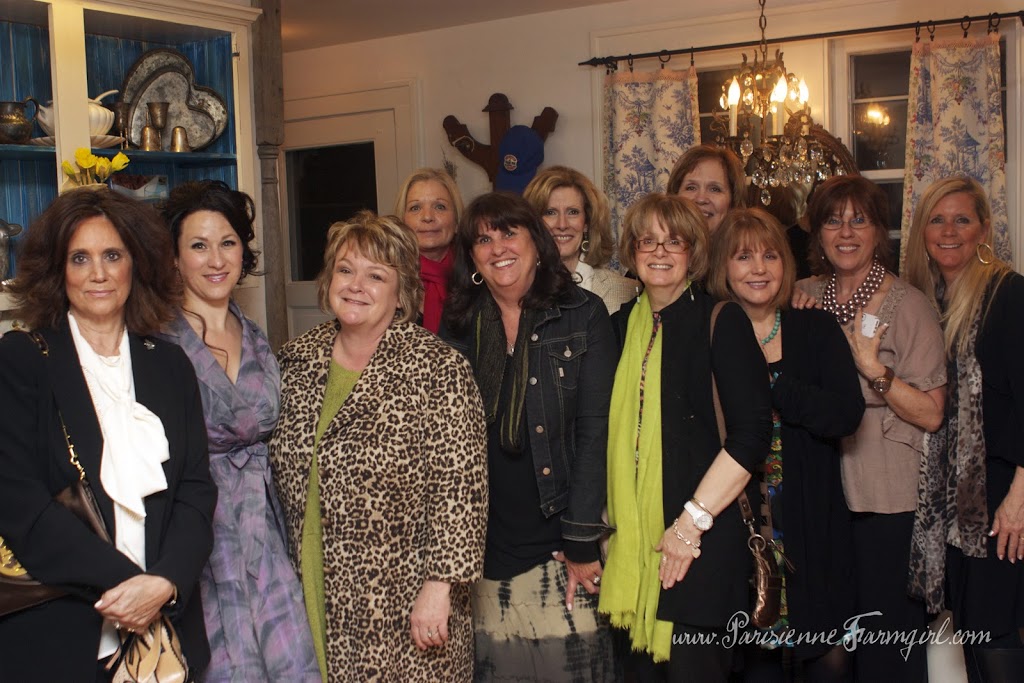 Now here is the troop-
I have had the blessing in the last 10 weeks or so of having this group of women enter my life. This is Susan and her Romancing the Home team. I honestly don’t know when I have encountered such a wonderful batch of women! Fun, creative, stylish, generous and SO KIND! They came in two carloads to the party, gave the most beautiful hostess gifts… all in all they are simply so supportive, it brings a tear to my eye and I do look forward to getting to know each of them better as the opportunity arises.
You girls are the best. 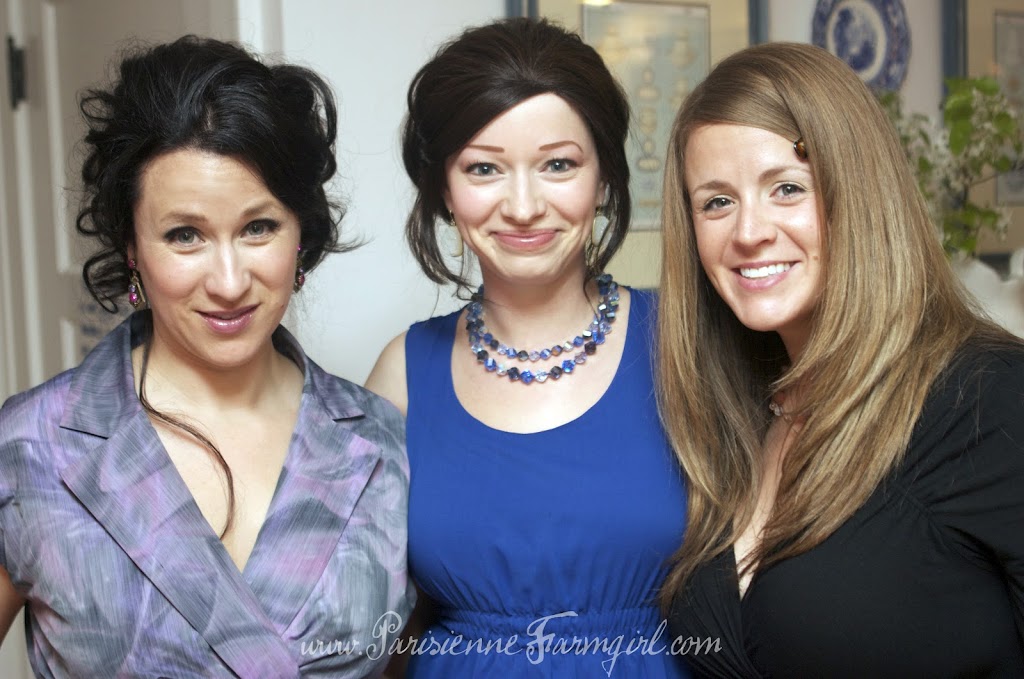 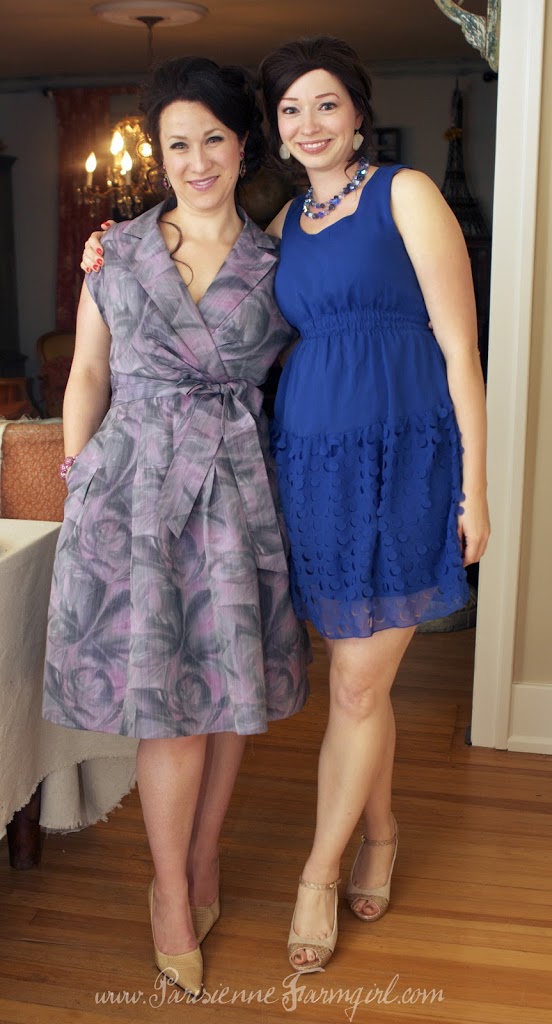 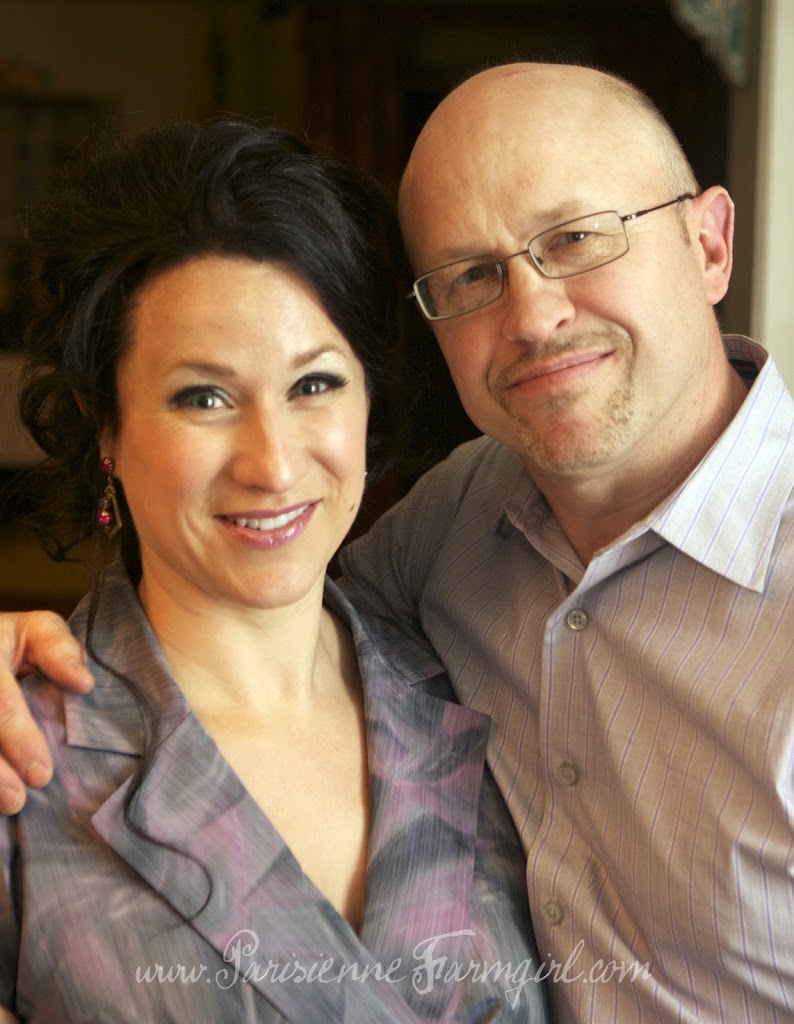 Me-n-Hubby at the end of the night
Whew! 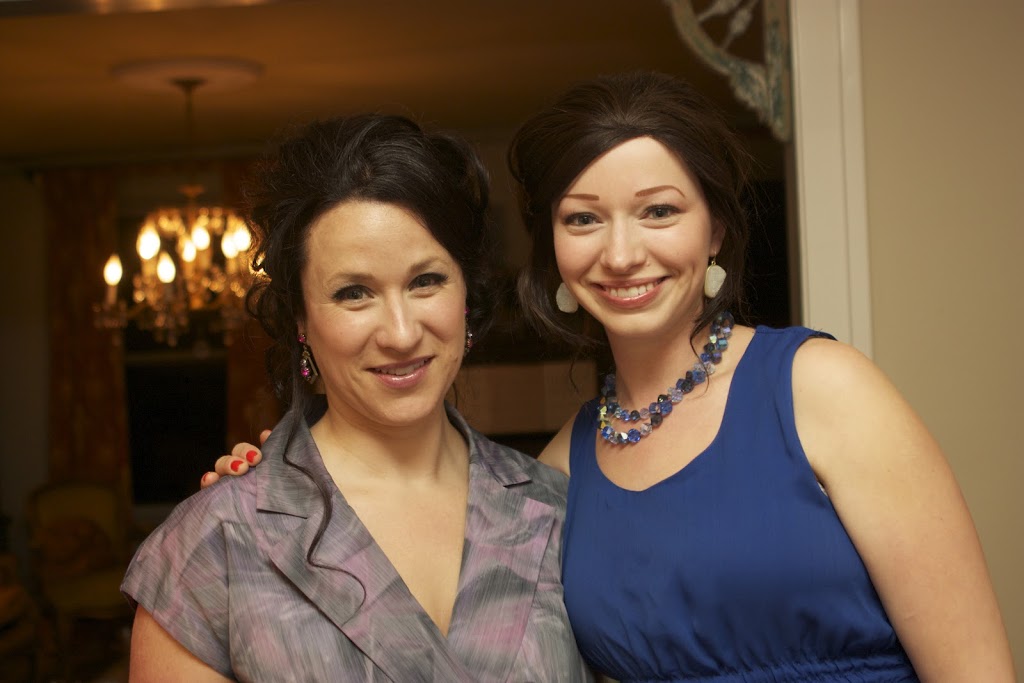 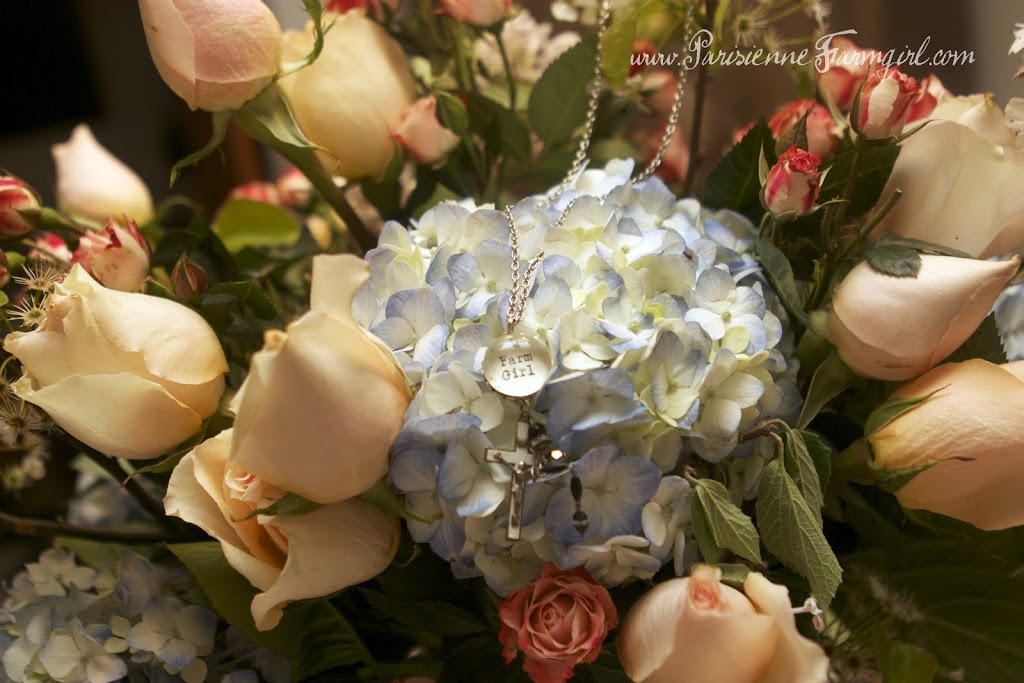 I was NOT expecting hostess gifts – just that people would come celebrate with me meant so much but people put so much those into their treats. Jewelry designer Jeannie LaBelle of The Gilded Junqueyard made this for me. “Farm Girl”… alas… hopefully someday very soon!
Pretty rings, keychains, Wellies with Eiffel Towers on them, perfume, etched cake plates, plates, champagne, a peony for my garden… WOW!
A special, long distance, thank you to a certain “Madame.”
You dear, dear thing you! From the bottom of my heart – Merci! 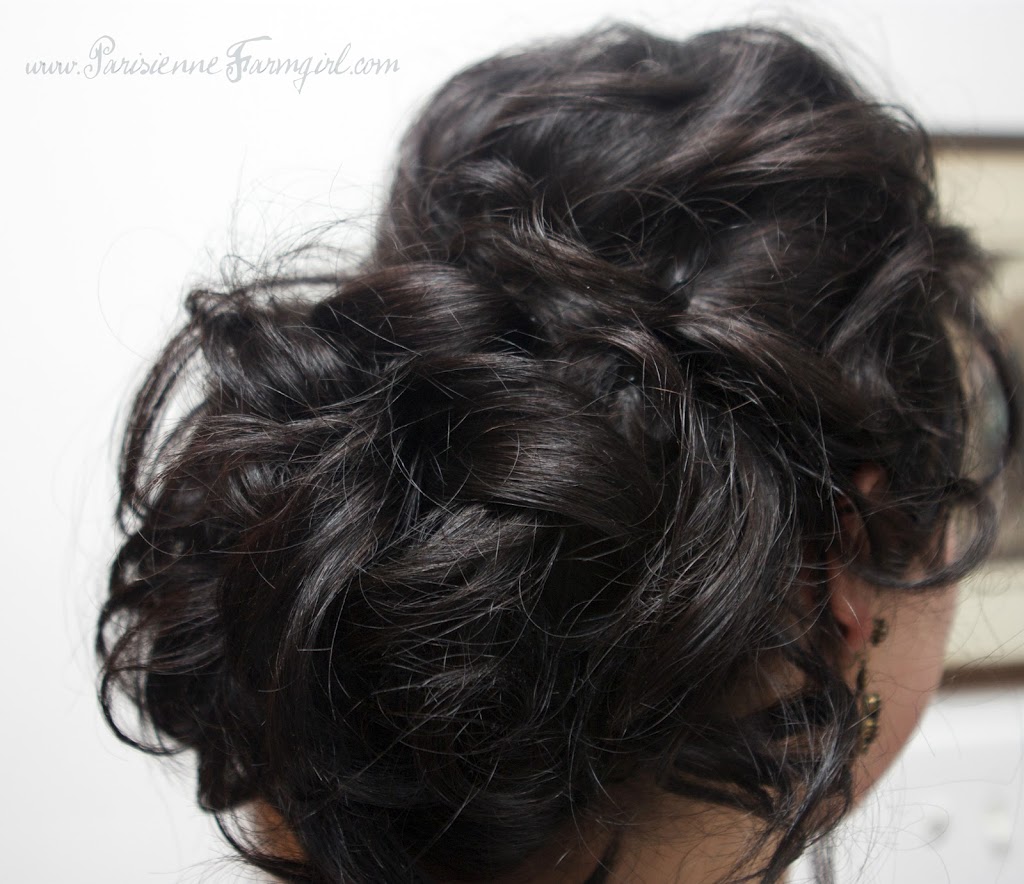 Ok – now for the “do”!
I am blessed with such talented friends and one of them is my friend Anna. She is a styling wiz! And known for it – she actually gets called to the United Center to give the stars a quick mani before their show! Last year she “groomed” Sir Elton John, Vince Gill, Amy Grant, Donnie Osmond… FOR REAL! 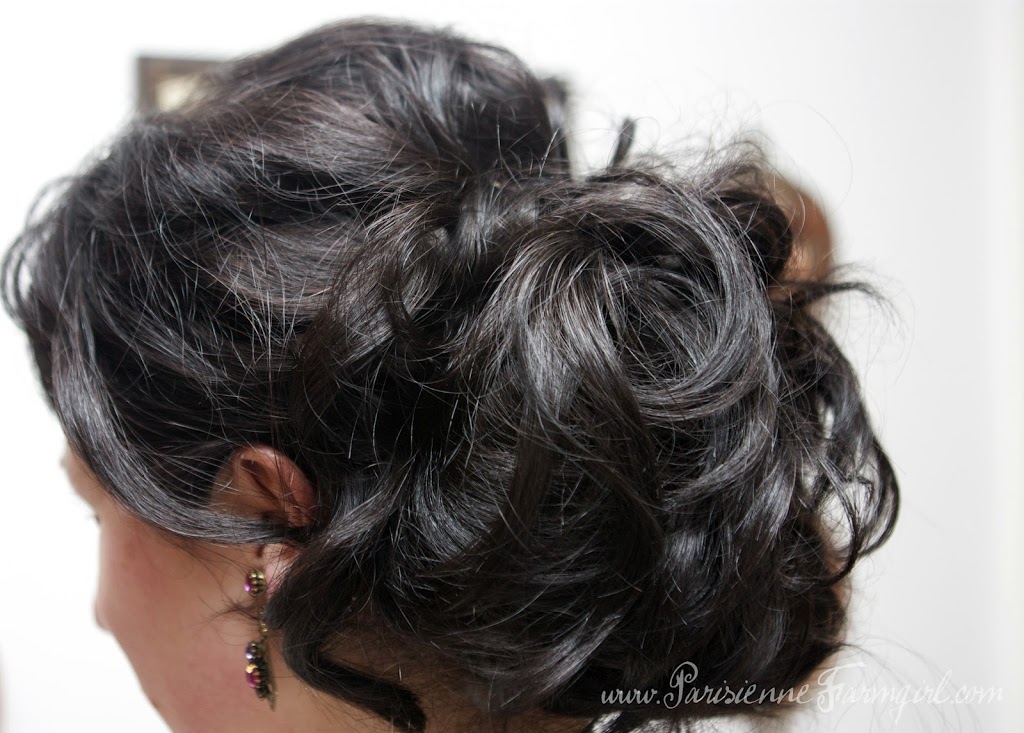 When she came by I told her I wanted something retro (on account of the style of my dress) meets Marie Antoinette! SHE NAILED IT with no photo for reference! I swear I would where my hair like this every day!! I just loved it! The photos DO NOT do it justice. Anna travels, so if you need an updo let me know and I’ll give you her number!
So…
I’ve got some video clips and some “morning after” shots I’ll share later this week. We’ve had a wonderful time as a family since the party. We stayed in our jammies for almost two days straight… dishes be damned too. Then we went on some walks, made some great meals and tomorrow it’s back to school (we school Tues-Sat). It feels so good to have this magazine finally launched. 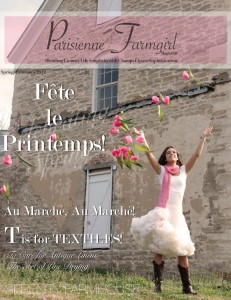 Thank you girls so much for everything! For those of you who took an evening to come to the launch, for all the kind words on Facebook, for the subscribers that pour in all day long…
Joel and I are so touched.
Merci. Merci encore.