This time around my contractions seemed so strange. They seemed to be all over the place. Rapidly getting closer together but some were twenty seconds, some were a minute. They would peak in agony and then just stop… not even tapering off. Just stopping. I got pretty frustrated as the pain was intense but they just seemed so weird. I was feeling a bit of pressure too, like Joel, the Midwife and Nurse (Debbie and Jane) were just waiting for things to kick into high, high gear since my previous two births had been so fast. (Two and three hours.) Once I expressed this the nurse and midwife excused themselves to go downstairs so Joel and I could get down to business*.

And we did. Joel comforting but cracking jokes in between contractions to keep my spirits up…
“You know when I’m down to just my socks that it’s business time baby…”

Awhile later I heard myself begin that slight grunting sound at the end of my “relaxing exhales”. I knew that sound. I wanted to believe I was getting closer. Debbie and Jane heard it too and came back upstairs. Now the pain was here in all it’s fullness. And I was so tired from the terrible sleep the night before. I began to cry. With each contraction I just broke down and cried, so desperate for it to be over. Debbie assured me the baby would be here by lunch time but my mind was skeptical, wondering if she was just cheering me on. I wanted no cheerleading. I needed it to be over. Strange thoughts were going thru my mind. I wondered HOW IN THE WOLRD I had done this three times before. My first lasting 28 unbelievable hours. I vividly saw every woman over the millennia that had ever birthed without drugs (no offense to you pain relief girls!) but I saw the slaves in the fields, the Jewish women, whose bodies, in sheer stress went into labor in the box cars, crammed with people. It was crazy.
I felt for all of us.

Contractions must have been about every 30 seconds to a minute and this point and Joel and I were doing our thing… the way we do. Rocking. “Slow dancing.”
Poor guy, “Just breathe, just breathe.” was all he could seem to get out to encourage me. During a contraction I snarled, “WOULD YOU STOP SAYING THAT?!! What the frick do you think I am doing!!!” and then in the few seconds before the next contractions I began to laugh and so did Joel, then Debbie and Jane. “Wow. You’ve never yelled at me during labor before.”

I continued to cry. Crying that I just wanted to push. That I loved to push. At least that is something you can DO instead of just standing or sitting there being racked with pain.

A little more time passed and I decided to let her check me. I had still had that grunting urge… she didn’t want me to push too soon. Don’t they always say that? She checked, which was horrible and made me break down in sobs again but she said I was almost there. Within minutes she was telling me to listen to my body and do what it said to do. I could totally tell the babies head was ready to pass thru the cervix… there is no feeling like that. It’s funny, cause I swear Joel and I could deliver on our own (and have!) but there is something so encouraging about the verbal affirmation of my midwife telling me to go for it.

He must have heard me.

Oh, and then to think that I had WANTED to push. I laughed out loud and verbally mimicked myself, “I just want to push!”

I grabbed Joel’s forearms to prepare for our little dance for the oncoming contraction and that’s when my legs said, “We’re done!” and began to buckle. I have never passed out before but I could stand up no more. I shouted that I was going to faint and Debbie and Jane jumped over to have Joel help me get on the bed. With the next contraction I pushed with all I had. I felt the head come, FLYING down and out… then a shoulder…

I had to stop my giant push half way.

“Cord!”
said the midwife and for what seemed like an eternity but was probably a second she unlooped the cord from around his neck. I had paused my push and finished it off without starting all over on another one and “poof”. It was over. I had been laying on my side and now was on my back with relief and thump suddenly there was a warm mass laying on my chest. I opened my eyes to see my beautiful baby. Totally COVERED in thick vernix, whimpering slightly.
It was over.
I was in love.

As I cried those first moments, hysterical, “It’s over”s and “Isn’t he beautiful”‘s Debbie and Jane seemed quiet and rubbed on him. They didn’t think he was quite pink enough. Deb just wanted him to cry a bit. Poor thing came flying out in one shot, I wouldn’t have the energy to cry either. She got her little oxygen tank out and waved the hose blowing oxygen in his face for a minute. That made him mad and they got the result they were looking for.

There is nothing like pushing out a baby. It’s horrible and AWESOME at the same time, and to have him in my arms. From in, to out. Well, no matter how they arrive, it’s just a miracle isn’t it?

A minute or two later Joel called downstairs for the kids to come up. That was awesome too. To present your children with another sibling to love. What a privilege.

Everything went so well.
Three hours total. Joel was home, not out driving his truck in Chicago. It went fast. The kids were good. The sun was shining.

Within five minutes of being born Julien James (who was not named until an hour or two later) was surrounded by the people that hold him dearest. Midwife Debbie said, “Let’s sing a song. Let’s sing the Doxology.”
My throat began to collapse with the urge to cry. How could Debbie have ever guessed that the Doxology is such an important song to our family? My dear, dear Grampa leads us in that vocal prayer before every meal down on the farm, this summer all two hundred guests sang it as the blessing before my sisters wedding dinner… our entire family harmonizes… three and four generations… it’s very special to us.
So there we were, me with a wet baby, husband at my side. Four beautiful blessings from the Lord. My dear Mom who is my best friend and two women, Debbie and Jane passionate about a woman’s moment in time – being delivered of a baby. 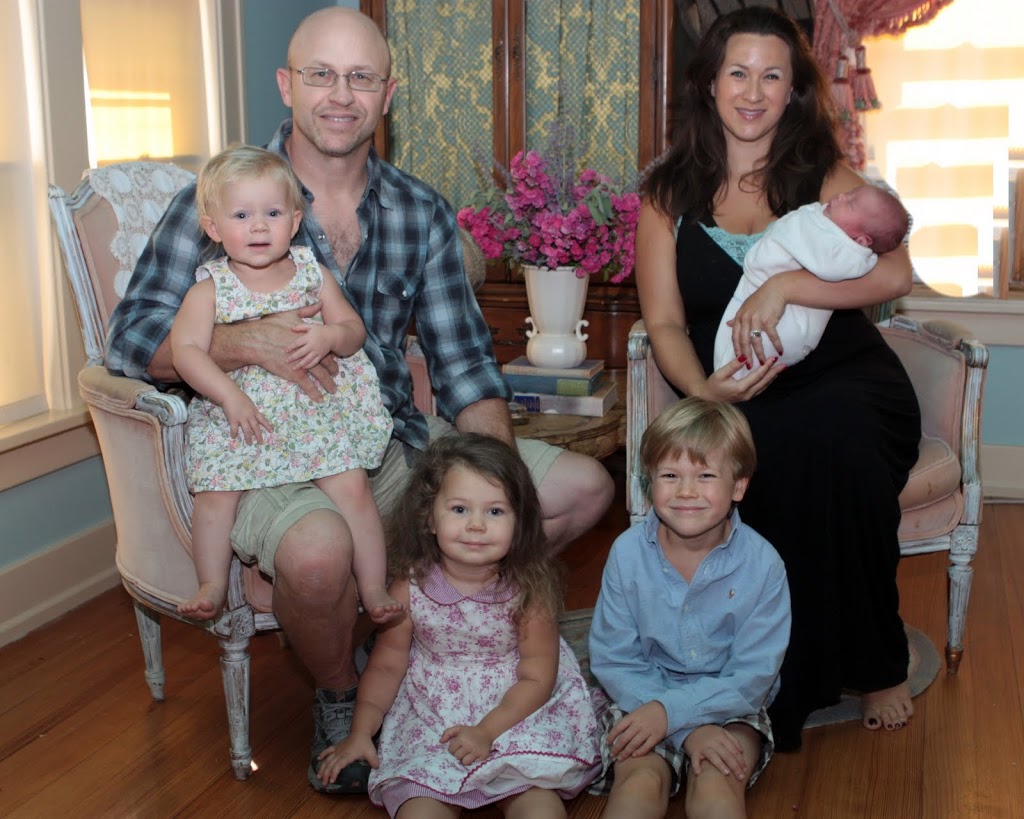 (*Not “business” but simply focusing on the contractions and relaxing during them! I had to add this post script because of my friend A-la-Parisienne’s hilarious comment aluding that we actually got down to “business”. TOO FUNNY but unterstandable considering the next original sentence where Joel sings “Business Time” to me by Flight of the Concords.)