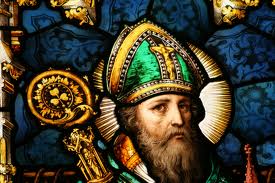 Ok… so it’s a little late in the day and this is pretty text heavy but I am quite a bit Irish and The Resurgence has a series on Vintage Saints I found interesting.   I learned quite a bit about St. Patrick in this post by Mark (O’) Driscoll…

My family name was originally O’Driscoll until it was changed a few generations ago by relatives hoping to more fully assimilate into American culture after immigrating from Ireland. Though I was raised Irish Catholic, I knew virtually nothing about Saint Patrick other than the green beer, parades, shamrocks, leprechauns, and drunken Red Sox fans that celebrated in his honor every March 17th. Technically, Saint Patrick is not even a saint, as he was never canonized by the Roman Catholic Church. Additionally, Patrick was not even Irish. Rather, he was a Roman-Britain who spoke Latin and a bit of Welsh. Patrick was born around 390 A.D. When he was roughly 16 years of age he was captured by pirates and taken to Ireland on a ship where he was sold into slavery. He spent the next six years alone in the wilderness as a shepherd for his masters’ cattle and sheep.

Patrick was a rebellious non-Christian teenager who had come from a Christian family. His grandfather was a pastor, and his father was a deacon. However, during his extended periods of isolation without any human contact, Patrick began praying and was eventually born again into a vibrant relationship with Jesus Christ. Patrick endured the years of isolation in rain and snow by praying up to 100 prayers each day and another 100 each night. In his early twenties God spoke to Patrick in a dream, telling him to flee from his master for a ship that was waiting for him. Amazingly, Patrick made the 200-mile journey on foot without being caught or harmed to find a ship setting sail for his home, just as God had promised. The sailors were out of food for the journey, and after Patrick prayed a herd of pigs miraculously ran toward the ship, providing a bountiful feast for the long voyage home.

Upon returning home, Patrick enrolled in seminary and was eventually commissioned as a pastor. Some years later God spoke to Patrick in a dream, commanding him to return to Ireland to preach the gospel and plant churches for the pagans who lived there. The Roman Catholic Church had given up on converting such “barbarians” deemed beyond hope. The Celtic peoples, of which the Irish were part, were an illiterate bunch of drunken, fighting, perverted pagans who basically had sex with anyone and worshiped anything. They were such a violent and lawless people, numbering anywhere from 200,000 to 500,000, that they had no city centers or national government and were spread out among some 150 warring clans. Their enemies were terrified of them because they were known to show up for battles and partake in wild orgies before running into battle naked and drunk while screaming as if they were demon-possessed. One clan was so debased that it was customary for each of their new kings to copulate with a white mare as part of his inauguration.

In faith, the forty-something year-old Patrick sold all of his possessions, including the land he had inherited from his father, to fund his missionary journey to Ireland. He worked as an itinerant preacher and paid large sums of money to various tribal chiefs to ensure he could travel safely through their lands and preach the gospel. His strategy was completely unique, and he functioned like a missionary trying to relate to the Irish people and communicate the gospel in their culture by using such things as three-leaf clovers to explain the gospel. Upon entering a pagan clan, Patrick would seek to first convert the tribal leaders and other people of influence. He would then pray for the sick, cast demons out of the possessed, preach the Bible, and use both musical and visual arts to compel people to put their faith in Jesus. If enough converts were present he would build a simple church that did not resemble ornate Roman architecture, baptize the converts, and hand over the church to a convert he had trained to be the pastor so that he could move on to repeat the process with another clan. Patrick gave his life to the people who had enslaved him until he died at 77 years of age. He had seen untold thousands of people convert as between 30-40 of the 150 tribes had become substantially Christian. He had trained 1000 pastors, planted 700 churches, and was the first noted person in history to take a strong public stand against slavery.

Curiously, Patrick’s unorthodox ministry methods, which had brought so much fruit among the Irish, also brought much opposition from the Roman Catholic Church. Because Patrick was so far removed from Roman civilization and church polity he was seen by some as an instigator of unwelcome changes. This led to great conflicts between the Roman and Celtic Christians. The Celtic Christians had their own calendar and celebrated Easter a week earlier than their Roman counterparts. Additionally, the Roman monks shaved only the hair on the top of their head, whereas the Celtic monks shaved all of their hair except their long locks which began around the bottom of their head as a funky monk mullet. The Romans considered these and other variations by the Celtic Christian leaders to be acts of insubordination. In the end, the Roman Church should have learned from Patrick, who is one of the greatest missionaries who has ever lived. Though Patrick’s pastors and churches looked different in method, they were very orthodox in their theology and radically committed to such things as Scripture and the Trinity. Additionally, they were some of the most gifted Christian artists the world has ever known, and their prayers and songs endure to this day around the world, including at Mars Hill where we occasionally sing the “Prayer of Saint Patrick” and the Celtic hymn “Be Thou My Vision.”