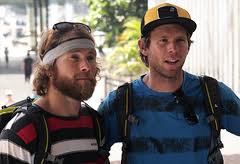 So often Christian’s embarrass themselves (myself included) when in the eye of the public.
Andy and Tommy were the exception.
You know me and my “Where Have all the Cowboys Gone” mantra… good Christian men are few and far between.  And in this culture, Christian or not, it seems you are hard pressed to find men that don’t whine, snivel and complain over challenges that life brings them…
Andy and Tommy were (are) the exception.

How bummed we were tonight to log on to cbs.com only to see the “rad” Christian, pro-snowboarders eliminated thanks to cab drivers with flapping jaws. 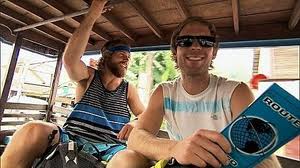 How badly we wanted them to win.

And yes, I’ve still got it bad.  After what, 19 seasons, I still lust over going on the Amazing Race.  I never, ever tire of this show.  I never ever tire of imagining how Joel and I would handle each and every Road Block.  I never tire of imagining how viper-like competitive I would be…
But anyways,
Andy and Tommy – thanks for not coming off like total Christian morons – which is how television usually portrays believers – thanks for being normal, kind, competitive and totally inspiring human beings.  Joel and I are truly sorry you aren’t in the final three.
It’s been a pleasure.