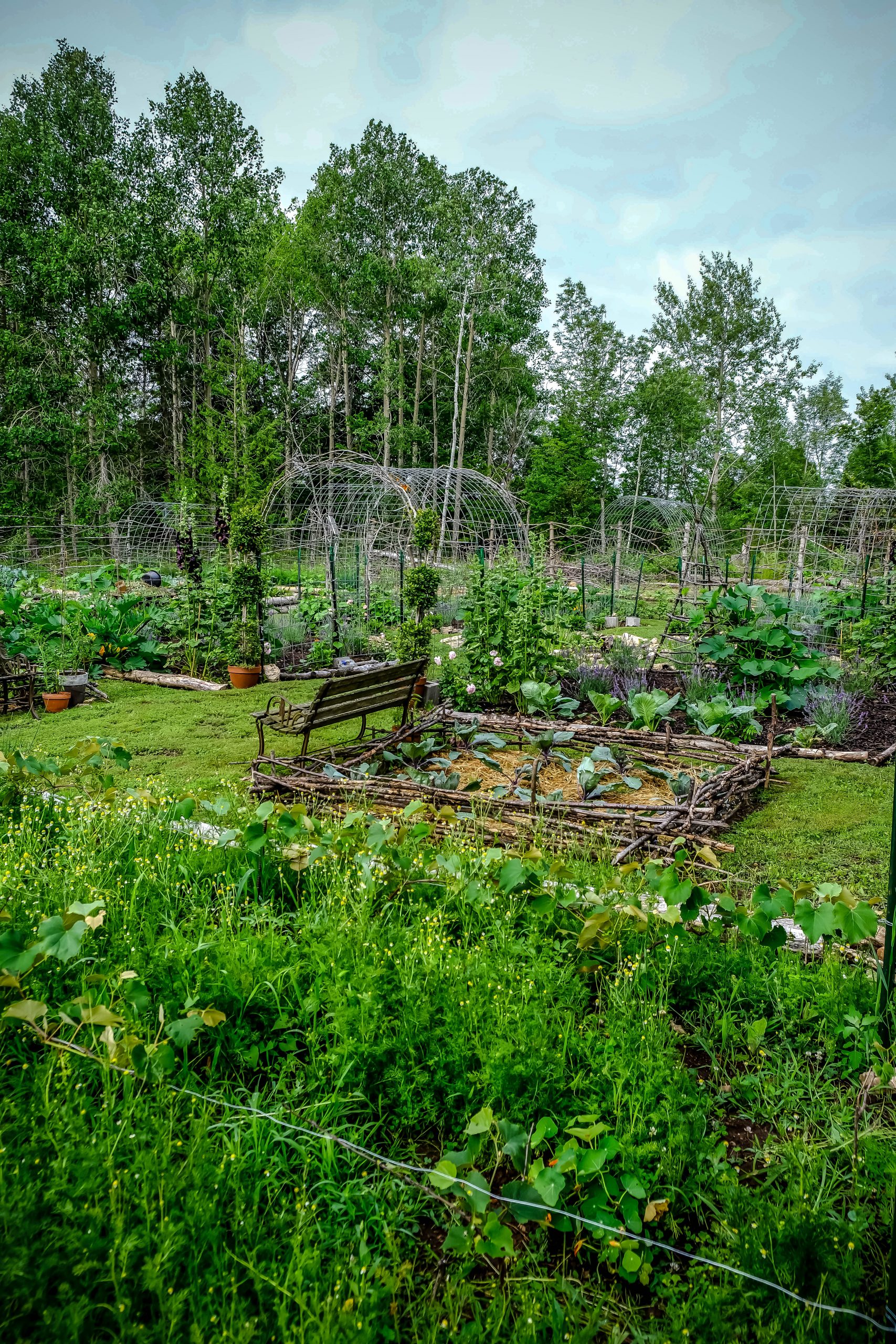 A late July Garden Tour (with a purpose). If we are going to talk about gardening fails and success then we need to start with this point first…

Gardening is always about next year.

That’s my quote and I stand by it.   I don’t say it to take away from living in the moment and enjoying the heady scent of a rose or the dirt under your fingernails… In fact, any garden has wins and fails every year and while the wins bring the most delight, it’s the fails that teach us to hone our skills and become our very best gardener. And that’s what I set out to do this year – become my very best gardener.

This is the third year here at Sur le Rocher Country House and Gardens.   Our little “everday château” tucked in the woods, just moments from Lake Michigan.   Dense with ash and white pine and the invasive, acidic junipers, this garden has been carved out of the woods and every flower, every green bean, every herb, represents early mornings and late evenings and humid afternoons of perspiration, diligence and straight-up LABOR.

No complaints here.   This girl was made for work, but late July is a time to look back and celebrate all that that’s done and learn from my mistakes.

Twilight in the Garden

I spent some outdoors the other night. It was twilight in the garden and the storms were rolling in and out. My thoughts were rolling too as I tried to look pragmatically at my fails and look with celebration at my wins.

I prefer to learn first and celebrate later so here’s fail number one:

I changed my seed starting medium this winter and some of my seedlings didn’t care for the change.   My beloved snapdragons in particular.   So, though it’s late July and I should have mounds and bouquets of my signature snaps… I don’t.   No Madame Butterfly… no Potomac Apple Blossom.   I can’t think about it too much or I’ll cry.   And yes, I did cry. I’ve been growing snaps for twenty-five years. In a desperate move, I ordered very costly flats of the two varieties, but they couldn’t be delivered until early July.   So hopefully by the snowfall, I’ll have some snapdragons.    Hardy, har, har.

Fail number two?  We were too exhausted to finish the raised beds.   If you watch the video, and I hope that you do, you’ll see way in the back of the garden my thought process and creativity sorta peeters out.   Turns out that hauling logs out of the forest all spring got the better of our bodies and by June I waived the white flag of surrender.   The cow was being delivered and the three remaining, log-cabin style raised beds would have to wait.   They’re still waiting.

Fail number three?  My herb garden.   Half of it is AH-mazing.   The other half?  NOT so much.   It’s like my red-headed stepchild garden apparently (sorry to all my ginger, step-friends out there).   I just can’t get inspired to do anything with it.   I popped some lilac in there.   Some Lady of Shallot David Autins… and nada.   The one half is simply lame.   I’m resigned to be OK with that and when my world is buried in three feet of shimmering white, I’ll get out my books and my sketchbook and let the inspiration come to me.  Herb garden?   One half prolific.  The other half – total bust.

And the BIGGEST fail of the year?   The big pond.   This project was SO labor intensive, I again grabbed my white flag and for the sake of m y aching bones (and our well pump), I gave in.

The excavator dug it out down to the bedrock when he was here this spring helping us clear land for Fern’s pasture.   I then took some hand-me-down pond liners and proceeded to attempt to patch them together.   We harvested TONS of rocks from the land, formed out a waterfall… planted a willow… filled it and it was GORGEOUS, even though we didn’t have enough plant material to cover the rockery hill.   And then by the end of the week it was dry.   I fought back and filled it a few more times simply because it was so gorgeous.  But the truth is, I need a professional to come in and take what we’ve done and simply do it right.   And I’m a big enough girl to admit that.   We were on our way to gorgeous and we can be proud of the COUNTLESS hours we put into it.   Before we know it, the waterfall will be singing to us, and the Sister Bay sky will be reflecting in this huge water feature.

If I’m going to be someone who decides to DO IT ALL then at the same time I have to be the same kind of person who can look failure in the face.

You’ll come to see that a man learns nothing from winning. The act of losing, however, can elicit great wisdom. -Uncle Henry from “A Good Year”

Now for the good bits.   The WINS!

My new lavender beds are a TOTAL win!    They are the clean, edited, tidy addition that my potager needed.   And the copious amounts of lavender I’ve harvested so far should be criminal, their musky scent warming just about every room in the house.   Steeping in almond oil for winter skin treatments, steeping in honey for my lavender honey latté addiction and tucked here there and everywhere to remind me of the joys of the garden.

The raised beds that we did finish are a TOTAL success.   Last year’s market rows provided VERY little produce.  It’s simply impossible to keep out the invasive wild thyme and ever more harassing, wild oregano.    But the log-cabin-style beds we made have done two things for us.  They’ve thinned out the forest in the back of the garden and given us the delineation and rustic formality the potager needed, never mind the amazing weed control and soil management.   The produce this year has been AMAZING and I’ve already got my fall crops planted in many of them.

My rose collection is to be celebrated.   Year to date, I have 35 roses in my garden.   Thirty-four of them are carefully selected David Austins that will someday complete the vision for this space.   While they hit their peak a few weeks ago, and so they don’t have a spotlight in this particular video, you can see them in other episodes of “Potager”.   I know many of them will  give me one more go-round in a few weeks, and then I’ll tuck them under leaves and kiss them goodnight for the winter.    They are so beautiful to me and are to be celebrated, indeed.

And it’s imperative that we make lemonade out of lemons (by lemon trees are a win too now that I think of it), but in the case of my giant, leaking pond… it has become a giant rainwater playpen for my ducklings we are raising for a fall harvest.   Their antics provide us with many laughs, they are SO much happier than in the garage under a heat lamp AND… well… a winter’s worth of duck fat in the larder does a body good.

If you’d like to see ariel footage of the July garden and hear more about the successes and failures of the space so far this year, I think you’ll enjoy this Youtube video (speaking of FAILS?   Hahahahah, filming this video was TOTAL chaos… thunderstorms, a setting sun, grainy drone clips and a camera unknowingly set on the wrong setting!)

The show must go on!   Successes and failures are a part of life from camera settings to the garden.

C’est la vie! And that’s fine with me.

I appreciate you being here. -Angela