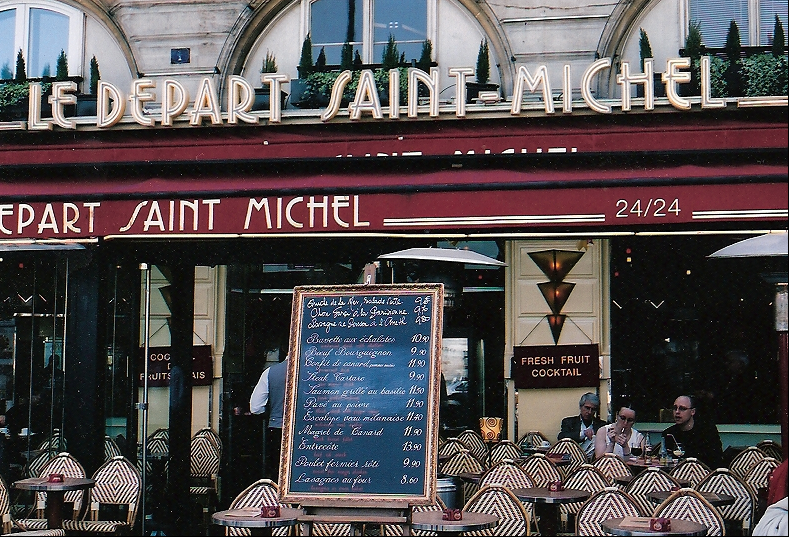 Passage from : Thirty Days in Paris

…Finally, after what I imagine was at least 3 miles later (I forgot my little pedometer thing) I made it back, feet throbbing to my apartment but no rest was in sight… I went to lie down and the phone rang. It was Jill’s friend Vicki and we made plans to go shopping and then for dinner. I really wanted to go to le Chien que Fume (The Smoking Dog) because I have always wanted to try oysters and I have it on good authority that this is a great place to try them for the first time. Mais alors, I left my guidebook that would help me with that at home and I couldn’t find it in the phone book.
Instead, we went shopping. I needed a hair dryer and one of those bags with the wheels on it that everyone uses here and I have been looking all day for Caudalie skin care products. It seems like on my last trip they were more readily available at the pharmacies but I have not been able to find a pharmacy that carries them yet. I guess that is why God made Sephora. And boy did he make this one. I think we were on the rue Rivoli. We shopped at a two story Sephora (about 5 times bigger than the one at Woodfield) and I found my perfume that is discontinued in the United States. I was very happy. We then went to the Monoprix; like Target only better if that’s possible because J’aime Target. I found my hair dryer and my cool little bag with wheels. Pulling that thing behind me I am one step closer to becoming a true Parisienne!
After having no luck with “The Smoking Dog” we decided on the Georges V on the Champs Elysses but our feet were throbbing so bad from a day of walling up and down the city we settled on a favorite of mine – Le depart St. Michel. Le Depart is by no means a grand café but it holds a special place in my heart. Four years ago Joel and I enjoyed our first meal here. Exhausted, jet lagged, full of anticipation yet starving we threw our luggage in the corner of our hotel room on the rue des Cannettes and set out to discover the city. Notre Dame was the closest of the big sightseeing attractions (as least ones that I knew Joel would immediately recognize) but we were so tired and so hungry that we could go no further so we stopped before crossing the street to the cathedral for soup a l’ongion at Le Depart St. Michel. Vicki and I were standing in the very same spot four years later just as hungry and just as tired.
I was hoping to acquire an acquaintance with a few waiters at a few cafes so I could feel like a regular and be able to practice my French on my visits. My hopes were realized. Vicki and I met a very nice waiter named Christophe and he helped us with our pronunciation – it was very cool. Dinner conversation was strained. I thought I was the kind of person that could get on with just about anyone but I just wasn’t finding any common ground. Being a very passionate person can be hard for me. If someone can’t even attempt to fake enthusiasm and any subject its hard for me to connect. Especially when the subject they can’t get excited about is PARIS! After dinner (about 10:30) we parted ways – she’s pregnant and I was really to collapse.
When I got home though I was wide awake. It was so bizarre so I sent out a few emails and watched a little TV au francais, talked with Joel and finally went to bed around 2:30a.m. Pathetique.