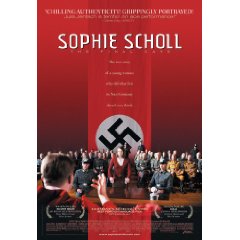 Alors, I calmed down about the salsa after a call from Blogger and friend Farm Girl Cyn – I added lots of lemon juice and now my little teeny canning cellar (read: shelf) hosts 6 quarts of Joel’s homemade, ring-of-fire, if you catch my drift, salsa.

(Lot’s of links for you in this posting!  All underlined and in bold!)

Now onto the really good stuff.   I know I have not updated the “In my DVD” player part of my sidebar in well, almost a year.  And for good reason.  I truly felt that aside from
Sophie Sholl

, Sweet Land was the best movie that I watched in 2007.  And remember, I was pregnant and miserable so I watched a lot of movies.
Now it’s the end of 2008 and I have enjoyed yet another jaw dropping movie – I’m a little late as this movie’s been out awhile but I never get to the show and Blockbuster only bought 8 copies so for 10 days I called 3 times a day until one was returned.
Expelled. 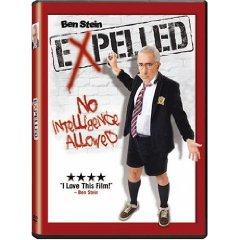 I am – freaking out.  This movie confirmed all my worst suspicions about Academia. ( Christian readers – did you know that 3 out of 4 Christian kids that go to college leave questioning their faith?)  I am, in no way saying don’t go to college, (though it’s something I won’t force my kids to do) but I am saying that the days of real learning and honest inquiry seem to be over.  It appears that learning like so many other institutions in the this country carries the same mantra – “Don’t question”, “Go with the flow”, “God is dead”, “We have all the answers while you still believe in fairy tales” etc.
Remember a long time ago when I wrote about scientists who don’t believe in Global Warming loosing their, or being denied grant money?  Turns out bullying like that is the tip of the iceberg!  Mention “Intelligent Design” or question Charles Darwin and poof!  You’re outta there – Tenure or not!
This movie examines the claims of these ousted scientist and then fleshes out the entire idea of evolution what happens when Academia and then society decides that God does not exist.  The parallels between and ties to liberal politics, abortion, and Hitler are undeniable and incredible.  You will even see exact footage that was used in that anti-abortion/racism post I did a few weeks back.
As the credits rolled I found myself wanting to scream – “Doesn’t anyone care that this is happening???”  “Doesn’t anyone see what is happening to this country, the road we are headed down?  The lies we are believing?”
It was amazing.  And yes, I do love politics but even if you don’t love it as I do or say, you’re burned out my the last 9 months of the great and powerful “O”, don’t, I say, don’t let it stop you from watching Expelled and telling anyone about it!
Anyone, anyone, anyone…