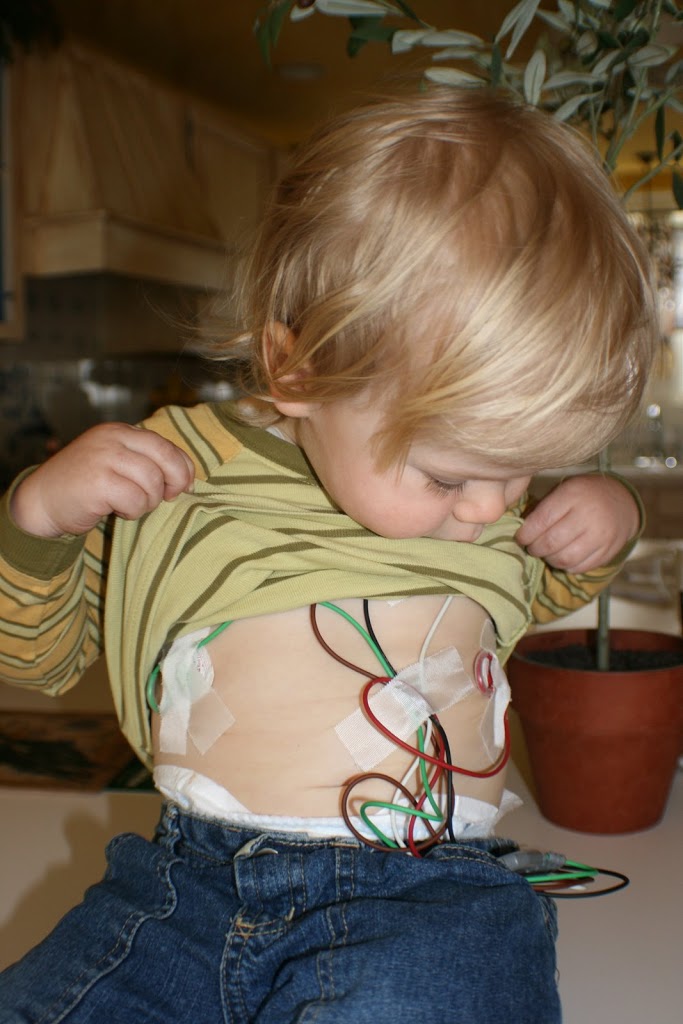 As much as I want to forget about hopitals, P.I.C.U’s, midnight medications I don’t want to forget God’s goodness.
Our babes- born with S.V.T. has been off his medication since about Halloween. Our cardiologist gave us the go ahead to do a trial run…30-40% of children born with S.V.T. outgrow it…and that is without prayer.
I have not heard Aidan’s heart racing at 300 beats per minute since July of 2005 – praise God! but I was stunned to hear that the doctor wanted him to wear a Holter monitor for 24 hours this week as a follow up. The news took me right back to a new mother calling her husband and mother, “he’s having an episode again”, trying to sooth a baby, laying on hands and praying, praying, praying…
I was so mad about the monitor. How in the world would an almost two year old cooporate with all those wires, stickers and the recording device for 24 hours? Thru diapers, play, naps and sleep. I thought – fat chance.
Yesterday we began to prepare Aidan,
“Tomorrow baby, we are going to go to the hospital and they are going to put stickers on you, beep, beep beep.” as we imitated the motions of stickers/leads being put on his chest.
“And you have to be a good boy, we know you can do it.”

Well, should I be surprised? He is doing it.
This morning he sat there completely still – LIKE AN ANGEL as she put the leads on and set the monitor. He was a little scared (he makes a “shy Di” face when he is unsure or scared) but he sat frozen as the nurse did her job.
Then even more good news – the old monitors that we had used before were twice the size of a walkman and today’s was new – the size of an IPod. We simply wrapped up the wires and put it in his jeans pocket and he has not touched it once!
He took a two hour nap and we have about 14 more hours to go.
Thank you for your prayers.